Jon Fitch Out of UFC 132 Rematch With BJ Penn 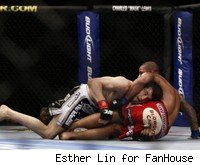 Still 13 weeks out from his rematch with BJ Penn at UFC 132, Jon Fitch has pulled out of the fight due to a training injury.

Sources close to the UFC confirmed the news to MMA Fighting on Wednesday. Word of Fitch's withdrawal from the bout was first reported by MMA Weekly.

There is no word yet on a possible replacement for Fitch. The fight was expected to determine the top contender for the UFC welterweight title currently held by Georges St-Pierre.

Though sources could not confirm to MMA Fighting the nature of Fitch's injury, ESPN reported Wednesday it involved the welterweight's shoulder.

The UFC announced the rematch for its July 2 card in Las Vegas less than two weeks ago. It was expected to serve as the co-main event on a card that now features a bantamweight title fight between champion Dominick Cruz and challenger Urijah Faber.

The draw with Penn snapped a five-fight winning streak for Fitch, who hadn't lost since a title fight decision setback against St-Pierre at UFC 87 in August 2008. He went on to five straight decision wins after that.

Penn returned to the welterweight division in November, scoring a 21-second knockout of former champion Matt Hughes at UFC 123. His move to 170 pounds, where he once held the title before vacating it in a contract dispute, followed back-to-back losses at lightweight to Frankie Edgar. The first, at UFC 112 last April, cost him his lightweight title, which he won at UFC 80 and defended three times. He lost the rematch, at UFC 118, as well.

Internet speculation began quickly after word of Fitch's injury was out regarding a possible replacement opponent for Penn, and Carlos Condit took to Twitter saying it's a fight he would like. "It would be an honor to fight a legend like BJ Penn, one of my favorite fighters ever. If the call comes, I would take the fight in a second," Condit said. Condit has won three straight, but hasn't fought since a UFC 120 knockout of Dan Hardy. He was scheduled to face Chris Lytle at UFC 127 in February, but had to pull out of that fight with an injury of his own.

But UFC officials told MMA Fighting no decision has been made regarding Penn on the UFC 132 card with a potential new opponent, or if he will wait to face a healthy Fitch at a later event.