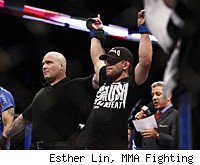 The UFC made nine fights available to fans live on Saturday night, with five streaming on Facebook and four on Spike TV. And if nine UFC fights wasn't enough for you (and really, is any amount of MMA ever enough?) now there's a 10th fight available live and free at UFC.tv.

The preliminary bout between Nik Lentz and Waylon Lowe, which wasn't part of either the Facebook or Spike broadcast, is available in full online, and it's worth watching for a number of reasons: Lentz won again and won the way he wanted to win, Lowe got a stern talking-to afterward from one of the UFC's major decision-makers, and a mistake at the end of the first round showed once again that too many state athletic commissions lack competent employees.

Allow me to go into a little more detail.

1. Lentz was unapologetic in victory, as he should be.
Although Lentz is 5-0-1 in his UFC career, he's been the subject of a great deal of criticism from fans who find his style boring. The victory over Lowe, however, wasn't boring at all: It was a back and forth battle that got more active as it went on and concluded with Lentz making Lowe tap to a guillotine choke, the first time Lentz has finished an opponent in the UFC.

After the fight, UFC announcer Joe Rogan asked Lentz if he had fought more aggressively as a response to that criticism, but Lentz said he just fights to win.

"I always try to fight fights how you're supposed to win them," Lentz said. "When you fight strikers, you out-grapple them."

That's the right answer: Lentz hasn't always been in the most exciting of fights, but he fights like a winner. And if the strikers he has fought don't like the fact that he out-wrestles them, that's their problem, not his.

2. Joe Silva gave Lowe some tough love.
Silva, the UFC's matchmaker, lectured Lowe in the Octagon immediately afterward, telling him he should have been more active when he had a dominant position over Lentz in the first round.

Although Lowe entered Saturday on a two-fight winning streak, he can't feel good about his future with the UFC. He didn't just lose, he lost in a fashion that wasn't pleasing to the UFC's brass.

3. The first round was marred by a timekeeper error.
This is the big one.

Ben Fowlkes described the end of the first round in his live blog: "A weak sound that may or may not be the airhorn signaling the end of the round is temporarily ignored. Eventually the ref figures it out and round one is in the books."

That pretty well sums it up, and it was disgraceful. When the first round was over, the timekeeper just tapped on the airhorn to make a faint sound that the fighters and the referee didn't seem to hear.

Rogan, sitting just feet from the airhorn at cageside, said, "I think that was the bell."

After about seven seconds of additional fighting someone yelled, "The bell rang," and the referee stepped in to separate the fighters. The referee then yelled to the timekeeper, "You need to stay on that horn." At that point the horn sounded again, more loudly than before, and the referee said, "Thank you."

"That was the weakest horn ever," Rogan said.

Although those extra seven seconds weren't pivotal to the fight, they did include Lowe drilling Lentz with a hard right elbow to the head. If that elbow had badly hurt Lentz, we'd have a huge controversy on our hands.

This isn't the first time we've seen something like this happen in the UFC: At UFC 123, the first round of the Maiquel Falcao-Gerald Harris fight ended seven seconds early, likely costing Falcao a first-round submission victory. The state athletic commissions need to do a better job of getting competent timekeepers who won't make such mistakes. And the UFC needs to tell the athletic commissions that if they can't run a fight competently, their states won't get UFC events and the revenue that comes with those events.

When three NCAA basketball referees ended this month's St. John's-Rutgers Big East tournament game when there should have been 1.7 seconds left on the clock, they were removed from the rest of the tournament. Officials who make timekeeping mistakes in MMA should also be dealt with harshly. This is a serious mistake, and there should be consequences.