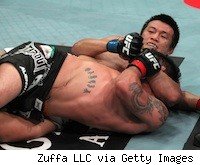 With the possible exception of Chan Sung Jung himself, perhaps no one was more excited to see "The Korean Zombie" use the twister to submit Leonard Garcia at UFC Fight Night 24 than Eddie Bravo – the grappler who's credited with bringing the move to prominence in MMA and jiu-jitsu competitions.

"I was blown away," Bravo told MMA Fighting. "It was surreal."

Bravo has been teaching the twister – along with other mainstays of his style, such as the rubber guard – out of his 10th Planet Jiu-Jitsu school in southern California for years. But Jung's use of the move marked the first time a UFC fight was ever finished with the twister. Considering where Bravo first learned it, he said, the fact that it took this long to be used in MMA's largest organization might be the most surprising part of the story.

"I can't believe it, because it's a move I learned in high school wrestling," said Bravo. "I thought those two years I spent in high school wrestling were probably two of the most insignificant years of my life. I started jiu-jitsu when I was 24 and had wrestled when I was 14 and 15. I never thought it would come back, especially like this. It's a big shocker. It's strange."

In wrestling, Bravo explained, it's called the guillotine, and it's designed to pin opponents. The reason so few people thought of modifying for it MMA or jiu-jitsu is because neither sport involves pins. That made it seem like a move whose usefulness was limited to one very specific set of rules, but Bravo figured out a way to incorporate it as a submission move that cranks the neck and twists the torso in extremely painful fashion.

"There's thousands and thousands of guys who could do the twister. They just never figured out how to do it on a jiu-jitsu guy," said Bravo. "What I did is, I came up with a bunch of different set-ups for it. The twister always existed, I just made it work for jiu-jitsu and I was the first one to pull it off in jiu-jitsu tournaments."

The first time he used it as a submission in competition was at a tournament in Santa Cruz, California in the late nineties, Bravo said. Soon the twister became his calling card, though he was still calling it the guillotine, since that's what he knew it as in his high school wrestling days.

It was jiu-jitsu legend Jean Jacques Machado who first dubbed it the twister, much to Bravo's dismay.

"Then people started calling me 'The Twister' and I hated it," Bravo said. "I would always think of the game with the yellow and blue dots that the kids played. ...People started calling me 'Twister Eddie' and I hated it. I even went up to Jean Jacques and was like, 'Man, this nickname is starting to stick. We have to do something. What is the twister in Portuguese?' Because I'd much rather have a nickname in Portuguese; that's pretty cool. He said it was 'tornado.' I was like, hey, that's way better. Let's go with that. But nobody called me 'Tornado.' They just kept calling me 'The Twister.'"

Eventually word of Bravo's unorthodox submission move spread, and before he knew it people were calling for it when he stepped on the mat at jiu-jitsu tournaments.

"Then, all of a sudden, I liked it," he said. "When people yelled it before I would compete, it just sounded right."

Over the years, Bravo has taught the twister to scores of people either in person or via his DVDs and internet videos, he said. He actually made it a point to try and do it to as many opponents as possible so as to compile enough competition footage of it, knowing that the unusual look would attract people's attention.

"If you get someone in an armbar or an arm-triangle, no one really cares to see the video," he explained. "It's not an exciting thing. But if you put someone in a twister, it trips people out. Even back then in the high school gym it was exciting. It was something where you could show your friends the video afterwards, and they'd be like, 'Oh man, what did you do to that guy?!'"

Unfortunately, the twister did not make him popular at the renowned Abu Dhabi Submission Wrestling World Championships, where the move wasn't allowed. Bravo wasn't about to let that stop him, though.

"It was banned, but I tried to do it anyway. In my first match I got the guy in it and the ref stepped in and yelled at me and made me let it go, so I let it go and transitioned to the back and later choked the guy. ...In the next match, I got the guy in the twister but I didn't crank the neck, which was the illegal part. So I got him to right before I crank the neck – just to show people that if I wanted to, I could get him in it too – then I released him. Sort of like a sport fisherman."

Bravo actually thought it wouldn't take so long for the move to be used in a UFC bout, though he never imagined that the first one to do it would be a Korean fighter who he'd never personally worked with, he said. But when he saw Jung use it to defeat Garcia, and then heard where he'd learned it, it was cause for celebration.

The weird part is, since Bravo adapted the move from wrestling, he still doesn't know who really deserves the credit for inventing it, he said. Still, after more than a decade of trying to spread it throughout the intertwined worlds of jiu-jitsu and MMA, he couldn't help but swell up with pride upon watching his signature move unfold before a national audience on Spike TV.

"I don't know who made it up. I would like to know who actually made it up. But the set-up, including the set-up that the Korean Zombie used, that's one of my babies. So I do feel really proud, and it's an amazing feeling to see it."