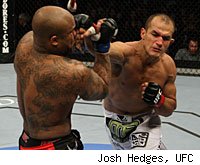 During the 12-season run of The Ultimate Fighter, many of the most memorable moments have involved the show's coaches. Ken Shamrock and Tito Ortiz wanted to kill one another. So did Rashad Evans and Rampage Jackson. Josh Koscheck spent most of his time on the show trying to get under Georges St. Pierre's skin. Multiple coaches have broken the door that leads into the Ultimate Fighter gym.

But from the way Brock Lesnar and Junior dos Santos are talking, moments like those are going to be lacking on the 13th season of the show, which begins on Wednesday night. On a conference call to promote their show, Lesnar and dos Santos were nothing but respectful toward each other, and they indicated that they both prefer to save any negative energy they feel for each other until they fight in June.

"He's actually a pretty nice guy," dos Santos said of Lesnar. "But on June 11 none of that really matters because my goal is to go in there and beat Brock." (Dos Santos was speaking Portuguese and I'm cleaning up the quotes his translator provided.)

Dos Santos said he's excited about the opportunity to reach more fans than he ever has before, thanks to Lesnar's popularity.

"Being on the show with Brock was great because Brock is so used to the media spotlight and being in front of the cameras," dos Santos said. "Brock is a guy that's bringing a lot of fans into MMA, he's a guy that's very well known in the U.S. and I'm starting to come up right now and this is a great opportunity for all of his fans to be able to see me."

Dos Santos had never even met Lesnar until their first day in the Ultimate Fighter gym together, but he says he was pleasantly surprised by what a nice guy Lesnar was.

"Prior to the show I'd never actually met Brock, so I was a little bit surprised of how easy to deal with Brock was, even though we weren't able to be together all that much," Dos Santos said. "It was great to be able to meet my next opponent and the experience overall was phenomenal."

Lesnar said that all he saw of dos Santos was when the two of them had to get together to set up the fights, and he was fine with that.

"I probably spent a total of 30 minutes with Junior on the show," Lesnar said. "I didn't make it a point to run into him or anything in that nature. ... I saw very little of him other than what we were doing for television."

For Lesnar and dos Santos to exchange anything more than pleasantries, we'll have to wait until they fight.