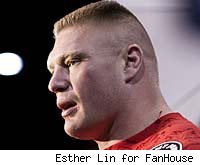 Words like "engaging" and "likable" haven't often been used to describe Brock Lesnar, but that's how he came across on Late Night With Jimmy Fallon, where he talked up The Ultimate Fighter and his June fight with Junior dos Santos. Then Lesnar gave Fallon a one-on-one MMA lesson.

Fallon asked Lesnar, "Could you teach me a move?" Lesnar obliged.

"In the fight world, a basic advantage you can get on your opponent is to take your opponent's back," Lesnar said. "So I'll teach you a version of the rear-naked choke."

Fallon seemed to find the term "rear-naked choke" funny, and Lesnar didn't have much time to really demonstrate anything, but Lesnar did show that he's a natural entertainer, and he read the promo for the next act effortlessly while clutching Fallon's neck.

Overall, the appearance wasn't quite as big a deal for the UFC as Jon Jones on The Tonight Show, but it was still a good piece of promotion for the UFC.