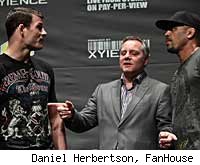 Imagine the world-class trash talk that would be generated if Michael Bisping and Chael Sonnen got together. Are you smiling at the possibility? Well, it could very well happen. It's the fight that Sonnen wants, and now, it's apparently the bout that Bisping wants as well.

In a Monday appearance on The MMA Hour, Bisping voiced a hope that he will next be matched up with the former No. 1 contender.

Bisping said that his management team has informed the UFC of his desire, and he hopes that when Sonnen's contract is unfrozen following his sentencing in a criminal money laundering case, he gets the call.


In his last fight, Bisping faced and defeated Jorge Rivera. Both the pre-fight chatter and fight itself were filled with controversy, with Rivera's team producing a series of pointed videos aimed at him. The Brit earned his revenge by winning in a second-round TKO, but an illegal knee and an ugly post-fight spitting incident marred the victory celebration. Afterward, Bisping was penalized by UFC president Dana White, who refused him a post-fight bonus.

Though Sonnen is likely to turn up the insults well past anything Rivera did, Bisping said he has no issue with facing another fight that could turn personal.

"The things that Chael Sonnen comes out with, they're so outlandish that you can't help but laugh," he said. "Listen, I think he's brilliant. I've watched the stuff from his last fight. I was in stitches. I was laughing my ass off. Even comments he said about me after my last fight, I just had to laugh at that. You can't not laugh. Of course he's going to get in my head at the time, but hopefully I've learned from recent experiences. It'll make for a great fight i'm sure."

One fight he's not so interested in? Nate Marquardt.

The usually quiet middleweight contender ripped Bisping before his UFC 128 win over Dan Miller, calling him, "an ass" and "a total punk," and saying he'd like to "punch him in the mouth and shut him up."

While all that is fairly tame by MMA trash-talk standards, Bisping took exception at the comments, noting that that Marquardt has had his own issues, both in and out of the cage.

"That guy, he's quite a hypocrite," he said. "He's a steroid cheat, let's not forget that. He's had points taken away for illegally kneeing people himself, and then he goes out talking about me as if I'm Satan or something. The guy's an absolute hypocrite."

Marquardt tested positive for nandrolone following his UFC debut in August 2006. He later tested clean in a re-test, and his suspension was reduced by one month.

Bisping shot back further when asked if he felt he had bypassed Marquardt in the division.

"Yeah, to be honest," he said. "He s---- the bed every time he's in a main event. He's had three No. 1 contender fights and a title shot and lost them all. I want to fight the top guys and I think Chael Sonnen for me is the biggest possible name I could get, and that's what I'm hoping for. Nate Marquardt doesn't excite me."

Addressing the UFC 128 controversy for the first time, Bisping said he was "disappointed by the whole thing," and insisted that a second-round illegal knee was unintentional, noting how much he had invested in the fight, including two months of training away from his family, a rise up the rankings, and a possible win bonus.

As for his post-fight antics, Bisping denied spitting on anyone in Rivera's cornerman. He said that after the fight, Rivera's corner -- who he was still mad at for participating in videos that he believed to be slanderous towards his fiancee -- was still "shouting abuse" at him, so he moved towards them and spit in their direction.

Though he says he didn't hit anyone, he still regrets the action.

"Absolutely, in hindsight, I wish I handled it completely different," he said. "I let myself down, I let the UFC down, I let the fans down. I would like to apologize again for that. Of course, I regret that massively. Words can't describe how much I regret doing that. I let myself get dragged into it, and I should've been bigger than that."