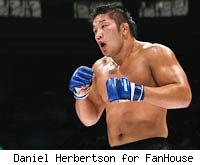 Unbeaten light-heavyweight Lorenz Larkin (8-0) will replace him in a bout against Scott Lighty, Strikeforce confirmed in a press release.

According to the promotion, Ishii was unable to secure a visa at least partly due to the natural disasters that have struck his home country of Japan over the last few weeks.

The 24-year-old Ishii is 4-1 in his MMA career, most recently defeating Jerome LeBanner in a decision on New Year's Eve. The judoka had once been the target of UFC overtures, though he eventually signed with Strikeforce.

The April 1 fight would have been his first time competing in the U.S.

His replacement Larkin will be making his first start in Strikeforce after making his way through the regional circuit. He's finished six of his eight wins via KO or TKO, including five straight. Lighty holds a 6-1 career mark, and is 2-1 in Strikeforce fights.