The Korean Zombie Bandwagon Reloads, And Other Fair-Weather Tales 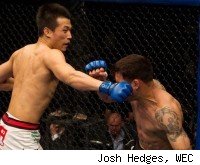 If you think the stock market trades on emotion and snap judgments, what about the world of MMA, where this morning's prodigy is tomorrow morning's garbage? It would be comical to see the seismic opinion shifts that take place before and after events if it wasn't so sad. Complaints are plentiful about how quick the UFC and other organizations are to cut fighters who lose two or three in a row, yet is there any greater sense of loyalty shown from other quarters of the MMA world?

Here's the thing about being a pro fighter: it's hard. Your body gets beat down, your confidence betrays you at times. The media and fans openly question you, your commitment, you endurance, and your all-around game. Matchmakers stick you in the cage with opponents that are good at the things you're not so good at.

Where is a fighter's safe harbor? Look, we're not supposed to like everything shoved down our throats. There are performances that deserve to be booed, and fighters who are difficult to appreciate. There are style clashes that lead to stalemates. But the wild, overreactive swings from one fight to the next make me feel that a dramamine prescription wouldn't be a bad idea.

Let's take a look at a few examples, just from last night.

"Phil Davis Stinks"
In the wake of Jon Jones' rousing title win over Mauricio "Shogun" Rua, everyone began looking to Phil Davis as the next "next big thing." He was going to be the man to give Jones a challenge, the one that could match his wrestling prowess and catch up to his creativity. Davis actually won last night, but the reaction around the MMA world seems to be somewhat negative.

Come again? The guy just beat a fighter with a decade of experience, and that's a step backward?

Davis -- who took the fight on short notice, by the way -- said afterward he was "falling apart" in camp and didn't always know whether he would be able to go through with it. He's earned himself a long layoff to get healthy, work on his overall game and come back strong. If he just beat a fresh Little Nog on short notice with a beat-up body, how much better do you think he'll be after taking some time off to let his body heal?

Maybe in some ways this win is a blessing. When he returns healthy, the expectations will be more modest, and he'll have a better chance of exceeding them. Either way, Davis is going to be just fine.

"Anthony Johnson Lied about His Gameplan"
Just a few days before their fight, both Anthony Johnson and Dan Hardy promised they'd stand in the cage and swing at each other until someone dropped. But once the fight started, Johnson threw a changeup, taking Hardy down four times in a fairly one-sided unanimous decision.

Not surprisingly, the reaction for it wasn't too positive. Sure, there is something to be said for Johnson planting the seed of expectation affecting the reaction, but let's be honest, how many fighters talk honestly about their game plans? Most fighters don't talk much about their plan at all, and Johnson isn't the first to say he was going to do one thing and then do something else. After all, misdirection is a valuable tool for fighters not just in the cage, but with words.

This is a guy who hasn't fought in 16 months. He wanted to feel winning again, and he was going to do whatever he needed to get it. Johnson has never been known as a boring fighter. In fact, this was the first time in his eight UFC fights that he's ever gone to a judges' decision, so cut him some slack.

"Dan Hardy Should Be Cut"
On the flipside of Johnson's performance is Hardy, who one year ago was the UFC's No. 1 welterweight contender, and today is in the midst of a career-worst three-fight losing streak. Of course, anytime a fighter loses two or three straight, the rumor mill swirls regarding his future.

Many now retroactively feel that Hardy was always overrated, and truth be told, he's going to have a long, long road to get back into the title picture, but he's always been a great personality, a game fighter, and he's popular in the UK. Losing to Georges St. Pierre, Carlos Condit and Anthony Johnson isn't exactly an embarrassment. On top of that, he's still only 28 years old, so let's not write him off just yet.

The Korean Zombie Bandwagon Reloads
Chan Sung Jung was one of the sport's phenomenons of 2010. His three-round epic with Leonard Garcia at WEC 48 combined with his catchy "Korean Zombie" nickname made him a cult hero to fans, but after he was knocked out by George Roop a few months later, the luster seemed to fade, and the warwagon lost quite a few passengers.

Last night, Jung authored another moment for the ages, becoming the first UFC fighter ever to pull off a Twister submission in the waning moments of the second. Guess what? The bandwagon is back! Liking the "Korean Zombie" is cool again. But why did that change in the first place? Was he any less game when he traded with George Roop and came out on the wrong end of a knockout?

Tastes shift and change all the time in MMA and sports, but these extreme position shifts are unfair to the athletes who put their bodies on the line in search of a personal goal and for our entertainment. In this instant-update world where everyone has an opinion, the race to have the edgiest take is making critical thinking an obsolete practice. Everything's not so cut and dry, so right or wrong. Everyone has the right to an emotional reaction in the heat of the moment, but if you're going to demand an honest effort from MMA's athletes, they have a right to demand an honest evaluation.