Phil Davis: If Dana White Says Get 'Em, I Got 'Em 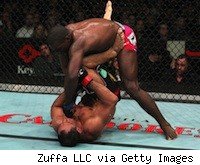 SEATTLE – Phil Davis improved to 9-0 with a unanimous decision win over Antonio Rogerio Nogueira at UFC Fight Night 24, but that doesn't mean he's going to start calling for a title shot just yet.

Yes, it was the most significant win of his career so far, Davis acknowledged at the post-fight press conference, but he's in no hurry to jump all the way to the top of the light heavyweight ladder.

"Pretty much everyone I've ever fought has had more experience than I have in fighting," said Davis. "So just going through four fights in one year in the UFC has put me in a place where everyone is a lot more experienced than I am, so I just need to make sure I'm giving myself enough time to develop as a fighter."

When asked if he thought he was ready for a crack at the top of the division after a win over an experienced vet like Nogueira, Davis deferred to the absent UFC president, Dana White, saying, "The man who makes the decisions is not here right now."

If you're wondering what that means as far as possible next opponents for "Mr. Wonderful," allow Davis to put it in the simplest possible terms.

Davis, who at times seemed a little exasperated by questions about his performance on Saturday night, said his focus now is on getting back in the gym and adding a few more tools to his arsenal.

He admitted that he was out of position for some of his failed takedown attempts against Nogueira in the first round, and said that early jitters played a factor in the close opening frame. As far as whether those jitters were due to the magnitude of the fight or the heat of the spotlight in a Spike TV main event, Davis had his own hypothesis about the source of the nerves.

"I think mostly what it has to do with was the fact that there was another man trying to throw punches at my head."

Still, a win is a win, and Davis said that getting a victory over Nogueira would add to his confidence in future fights as he moves on to take tougher and tougher opponents.

And while he seems to have resigned himself to answering a certain number of questions about a potential fight with 205-pound champion Jon Jones during every single interview, Davis said that's not necessarily a bad thing – if it's taken the right way.

"I'm not annoyed at all. I like that people bring me up when Jon Jones comes up. You just have to make sure that you let people know that...I don't want to be walking in his shadow. Then people have the same expectations for me as they have for him. We have different styles. He's his own fighter and I'm my own."