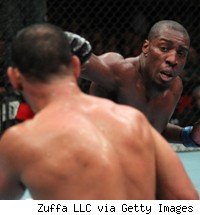 In a battle of youth and athleticism against experience and technique, the youngster Phil Davis defeated the legendary Antonio Rogerio Nogueira Saturday night at UFC Fight Night 24.

But it wasn't easy.

Although Davis came into the fight as a heavy favorite and had been proclaimed by some as the man who would some day beat UFC light heavyweight champion Jon Jones, Nogueira made life difficult for Davis in the early going, and the fight turned into a 15-minute, back-and-forth battle that was closer than the judges' scorecards -- all of which gave Davis the fight 30-27 -- would suggest.

In the first round Nogueira was particularly effective at shrugging off the takedown attempts from Davis, who was an NCAA champion wrestler at Penn State and is excellent at taking his opponents down and keeping them down. Davis had to be frustrated at the end of the first, even though all three judges gave it to him.

Davis improved his professional MMA record to 9-0 and showed off some of the athleticism and wrestling technique that makes him a great prospect for the UFC. But he also showed that he can't just waltz into the cage and dominate a legend. Nogueira gave him all he could handle.