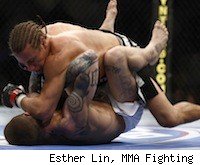 The two best 135-pound fighters in the world will square off some time later this year for the first ever UFC bantamweight title match in what should be a great showcase for what has quietly become one of the UFC's most talented weight classes.

Before the UFC absorbed World Extreme Cagefighting, the smaller guys were largely overlooked by casual MMA fans. But now that the UFC has added the WEC's bantamweights -- and also snapped up some 135-pounders from other promotions -- the bantamweight class is stacked. In fact, as I put together my latest ranking of the Top 10 bantamweights in mixed martial arts, all 10 of them are now under contract to the UFC.

The top two, as you probably suspect, are bantamweight champion Dominick Cruz and the only man to defeat him, Urijah Faber. Those two will square off at UFC 132. But the rest of the bantamweight division includes several talented fighters who could become worthy challengers to the bantamweight title in the years ahead.

(Number in parentheses is the fighter's rank in the last bantamweight list.)

1. Dominick Cruz (1): The best in the world at 135 pounds is still largely unknown outside the hard-core MMA fan community, but that will change once the UFC starts promoting his upcoming title fight with Faber. Most of Cruz's wins are by decision, and he'd probably have more fans if he'd go for more finishes rather than out-pointing his opponents, but make no mistake: Cruz is an absolutely sensational, well rounded mixed martial artist.

2. Urijah Faber (2): Faber, the only man to beat Cruz, needed just 98 seconds to make Cruz tap when they fought four years ago. But Cruz is a much better fighter now than he was then. Their rematch should be great.

3. Joseph Benavidez (3): The UFC dropped the ball by not putting the next-best bantamweight in the world on the televised UFC 128 card, or at least on the Facebook stream. Benavidez beat Ian Loveland by unanimous decision to run his record to 14-2, with the two losses coming to Cruz. Not bad for a tiny guy who should be fighting at 125 pounds.

4. Brian Bowles (4): Bowles looked great in his UFC debut, choking out Damacio Page in the first round. Bowles is 9-1 in his MMA career, and like Benavidez, he has lost only to Cruz. A Bowles-Benavidez matchup makes too much sense not to happen.

5. Miguel Torres (5): After dropping back-to-back fights to Bowles and Benavidez, Torres has retooled and improved, taking better advantage of his height and length, and taking fewer reckless chances. If he beats Brad Pickett at UFC 130, Torres could be next in line to take on the Cruz-Faber winner.

6. Scott Jorgensen (7): Following his loss to Cruz on the last WEC show, Jorgensen will make his UFC debut at June's Ultimate Fighter Finale, where he'll be a heavy favorite to beat Ken Stone.

7. Takeya Mizugaki (9): Although the split decision was tougher than expected, Mizugaki earned a victory in his UFC debut, beating Reuben Duran. I'd like to see him take on Eddie Wineland next.

8. Eddie Wineland (NR): Give Wineland all the credit in the world for the way he fought Faber: Hardly anyone gave him a chance of beating Faber in a fight that felt like it was virtually set up to propel Faber into a title fight. Instead Wineland beat Faber in the clinch in the first round and forced Faber to improvise before ultimately dropping a close decision.

9. Renan Barão (NR): The 25-1 Barao has one of the most impressive records MMA has ever seen: He lost his first fight, six years ago, and is 25-0 since then. (Barao also has a no contest on his record.) He'll make his UFC debut against Demetrious Johnson at the Ultimate Fighter Finale.

10. Charlie Valencia (10): Valencia, who like Benavidez should really be fighting at 125 pounds, will make his UFC debut in what should be a very entertaining fight against Ivan Menjivar at UFC 129.