For the Last Time, Phil Davis Is Not Jon Jones -- and That's Okay 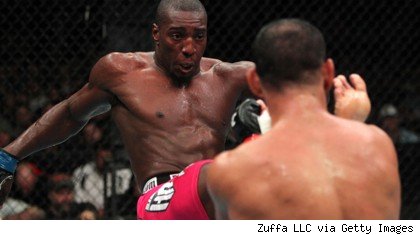 SEATTLE – To put things in perspective, here's what Phil Davis did at UFC Fight Night 24 on Saturday night: he stepped up and took a much tougher fight than the one he was originally slated for, much sooner than he was originally training for. Then he won a clear-cut, if not spectacular unanimous decision over an MMA vet with nearly three times as much experience as him in the cage.

To understand the boos from the crowd and the mild disappointment from fans, we should also probably mention what he didn't do: walk on water.

Maybe Davis was a victim of the UFC's hype machine, or maybe the specter of new light heavyweight champ Jon Jones still loomed too largely in too many minds on Saturday night. Whatever the cause, in victory Davis found out that it's not quite enough to be merely very, very good when people, rather rightly or wrongly, expect you to be incredible.

Not that there was any doubt that Davis had won the fight. At worst, you could argue that he only won the last two of the three rounds, which would still make for a clear victory. Antonio Rogerio Nogueira stopped his takedowns in the first frame and fired off a few blistering left hands to give Davis something to think about in the stand-up game, but once "Mr. Wonderful" got his single-leg working, it was all she wrote.

Still, he didn't destroy Nogueira and he didn't utterly outclass him. Most nights, that would be just fine. After all, how much do we expect from a guy who's been a professional for less than three years, especially when he's up against a legend with a decade's worth of experience?

If not for "Bones" Jones, we might not expect much at all. But with his demolition of "Shogun" Rua still fresh in the minds of fans, somehow Davis' progression seemed lackluster by comparison.

The parallels make some degree of sense. They're both young, African-American fighters with wrestling backgrounds. Both have run through more experienced opponents and racked up excellent records.

But let's not forget, the thing that makes Jones' story so insane is that it's one of a kind. Walking into a gym with nothing more than community college wrestling credentials and the need to make some quick cash, and walking out as UFC champion three years later? That's simply not done.

But just because Jones did it doesn't mean we should hold every other similar light heavyweight to the same standard. It's not only unfair to the fighters who are trying to progress on a normal, human timeline, it also has a way of making very good seem like not good enough.

As Davis pointed out in the post-fight presser, his nine-fight career has been filled with opponents who were more experienced than him in MMA. His most recent win came against a guy who was beating up Alistair Overeem in Pride back when Davis was prepping for college wrestling meets and worrying about his grade in Intro to American History.

For Davis to march in and impose his will on a man who was a seasoned vet long before he'd ever learned to properly throw a leg kick is remarkable. It's just not miraculous.

If you couldn't understand why Davis resisted the comparisons to Jones before this fight, it ought to be crystal clear now. Only when put alongside a freak does the incredibly gifted person seem insufficient. In time, Davis may develop into a legitimate challenger for Jones. But at the moment he's still learning the ropes of this sport, which any fighter has a right to do when he's still seven-months shy of the three-year anniversary of his pro debut.

What Jones has done is amazing. What Davis has done is simply very, very impressive. It's the difference between being a phenom and being a talented prospect. When the latter fails to live up to the mark set by the former, maybe we should take a step back and ask ourselves what we were hoping for, and whether it's even fair.

Unreasonable expectations have a way of sowing disappointment. Now that we've learned that little lesson, maybe we can get back to letting Davis be himself rather than getting upset when he's not someone he never claimed to be.