Anthony Johnson: 'I Just Needed to Win' Against Dan Hardy 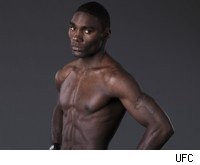 Remember when Anthony Johnson said there was "absolutely no chance" he and Dan Hardy would go to the ground in their fight at UFC Fight Night 24? Yeah, well. About that.

Johnson spent most of the three rounds either taking Hardy down or grinding away at him from the top position, turning what had seemed like a slugfest on paper into a grappling match in the cage. It might not have been the most popular decision he could have made, but it resulted in a unanimous decision win for "Rumble," so you can't argue with the results.

"I knew I could bang with him," Johnson said at Saturday night's post-fight press conference. "That was no problem. I knew I could do that, but I knew his weakness was his wrestling, and I know that's one of my strengths. I just took it to my advantage and used it."

Johnson dropped Hardy with a head kick early in the first round, but decided that he didn't need to keep the fight standing in order to win. Sure, Johnson said, a finish would have been nice, but what he really needed was a victory in his first fight back after sixteen months out of action.

"I was kind of disappointed in myself because I like to finish fights and this was just one of those times I didn't finish it," said Johnson. "Deep down inside, like I said, I wanted to finish the fight, but I just needed to win. After being out for a year and some change, I just needed to get back in the groove of things and just get the win. I didn't really need to go for the knockout or the submission. And I'm not really a submissions guy, but I tried some stuff."

Johnson seemed close to finishing Hardy with an arm triangle choke in the third round, but Hardy once again proved his resilience in holding out until the final horn. Despite his early success in the stand-up, Johnson said his goal was to exploit whatever weaknesses he encountered during the fight.

"I was just going for what I saw that was open. I saw a couple of punches that were open and stuff like that, but I knew what his weakness was, and that was the ground," Johnson said. "...I had him in the one submission – the head-and-arm [choke] – and he almost tapped. I think he almost tapped, but it's hard to tap Dan Hardy. The guy is a beast. I have so much love and respect for him. I thought I was going to be the first guy to tap him in the UFC, but that didn't happen."

Though some people questioned whether he would even make weight for the fight after blowing up to 230 pounds during his injury layoff, Johnson came in at 171 pounds on Friday and said he weighed about 195 pounds by the time he stepped in the cage. He certainly seemed to be the bigger, stronger fighter, and Hardy could neither stop his takedowns or get off his back once he was there.

The weight cut, Johnson said, "was hell, like always." The fact that he made it through successfully, he said, was a testament to his coaches' commitment.

"I wasn't hurting until like the last six pounds. I got down to 176 and my body was just like, okay, I'm not going to move anymore. But my coaches and stuff, they put me in the sauna and made me lose the weight. Like I said, I threatened my coach a couple times that if he didn't let me out of that sauna I'd whoop his a--. But I'm glad that he didn't. I'm glad they stuck by me, because if it wasn't for them I wouldn't have made weight."

In addition to surrounding himself with good coaches, Johnson said, he also helped himself by finally learn how to take good advice when it's offered – a skill he didn't have before his injury layoff, he said.

"I'm in a different life now. I'm not that same person, as far as being hard-headed and wanting to do my own thing and just worry about me. I don't do that now; I actually listen. I found out that you can get a long way in life when you start listening to people."

While he said he'd eagerly accept a rematch with Josh Koscheck, Johnson said he doesn't have his eye on any particular opponent in the UFC welterweight division, with one possible exception.

"There's only one person that I really hate...John Howard. But he got beat up by Thiago [Alves] so he ain't ready for me yet. We'll see. Whoever they give me I guess I'll just have to be ready for."

And if the UFC does decide to give him Howard next?

And just in case you were wondering why Johnson dislikes Howard so much, he has a very simple explanation for you: "He's a p-ssy."

At least there's one fight that wouldn't require Johnson to set his personal feelings aside.