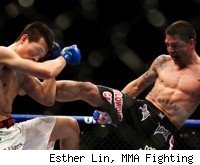 SEATTLE, Wash. -- This is the UFC Fight Night 24 live blog for Leonard Garcia vs. Chan Sung Jung, a featherweight bout on tonight's UFC on Spike TV event at the Key Arena.

Garcia (15-6-1) defeated Nam Phan last December in another controversial split decision. Chan (10-3) lost via head kick knockout last September to George Roop at WEC 51. This bout is a rematch from WEC 48 where Garcia emerged victorious in a split decision.


Round 1: They touch gloves to start, because, hey, they're old friends. Leg kick by Jung, then one by Garcia. Head kick by Garcia, but nobody's opening up too much this early. A big overhand right from Garcia knocks Jung back. Garcia is the aggressor early on, and he lands a nice counter left hand followed by a right. The round is only halfway over when we get out first exchange of wild hooks. The crowd chants 'Zombie!' just before another exchange of haymakers. Jung goes for the takedown and gets it. He looks for an armbar from north-south, but Garcia holds on and escapes. Jung is on top of Garcia against the fence, hammering him with some good rights in the final minute. Jung takes Garcia's back in the final ten seconds, but doesn't have enough time to do much with it. MMA Fighting scores the round 10-9 for Jung.

Round 2: Jung has a small cut under his right eye, but other than that seems to have suffered no damage in the first. He claims the center of the Octagon early in the second, while Garcia circles around him looking for an opening. Good body kick by Garcia. Jung keeps looking for the lead right uppercut, but can't find the range. A jumping knee to the head by Jung, and Garcia gives him a little smile. Garcia catches Jung stepping right into a leg kick. Garcia has already reverted to throwing that right hand like he's throwing a baseball, but Jung has learned to avoid it well. Jung finally catches Garcia with one of those right uppercuts, then shakes his hand out after the impact. Another jumping knee from Jung, and Garcia nods to him. They tee off on each other with hooks and dueling kicks, and Garcia goes down. Jung follows him with some ground and pound, then takes his back. Garcia tries to escape and Jung locks up a twister, cranking on Garcia's neck in the final seconds. Time is almost up, but Garcia can't take it and he has to tap.

Chan Sung Jung def. Leonard Garcia via submission (twister) at 4:59 of round two