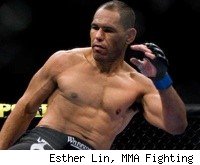 SEATTLE, Wash. -- This is the UFC Fight Night 24 live blog for Antonio Rogerio Nogueira vs. Phil Davis, the main event of tonight's UFC on Spike TV event at the Key Arena.

Nogueira (19-4) is coming off the first loss in three UFC fights, at the hands of Ryan Bader last September at UFC 119. Davis (8-0), who is stepping in for Tito Ortiz (stitches), has won all four of his UFC fights.

Round 1: They feel each other out in the opening seconds, with Davis testing how Nogueira will react to him changing levels. Two straight kicks from Davis, and Nogueira responds with a left hand. Another right front kick from Davis. You have to think Nogueira wasn't expecting that. After a brief stay in the clinch, we're back to the center of the Octagon, where Davis tries and fails to secure a double-leg. Davis gets lower and tries for another double, but Nogueira defends well. Davis throws a right head kick again and this time Nogueira counters with a left that moves him backwards. Davis manages to trip Nogueira, but the Brazilian is back up before Davis can capitalize. Another hard left and later a right for Nogueira. Davis can't get him down. The round ends with Davis unable to even get a grip on Nogueira in the clinch. MMA Fighting scores the round 10-9 for Nogueira.

Round 2: Another right head kick from Davis to start, but it's blocked. Davis paws with his lead hand and Nog whiffs with a big left. Nogueira is countering the kick with his left hand every time, and Davis looks as if he'd rather not take too many more of those. Davis shoots again, and again is stuffed. It looks as though we're finding out what Davis has when he can't get a fight to the mat. Another left lands for Nogueira as Davis kicks. Davis shoots for a single-leg and finally manages to get Nogueira down. Davis lands a right hand from Nog's guard, but then the older man ties his wrists up well. Nogueira kicks Davis away and tries to scramble up, but Davis catches him from behind and hauls him down. Davis is controlling Nog from behind, punishing him with punches and then knees in the final seconds. MMA Fighting scores it 10-9 for Davis.

Round 3: They touch gloves to start the final round. Davis throws the front kick, and no counter left from Nogueira this time. Good straight right from Davis, followed by a jumping kick a few moments later. Davis grabs a single-leg and works Nogueira to the mat again. Nogueira tries to scramble up from half-guard, but Davis jumps on him and brings him back down. Davis tries to work from half-guard, but Nogueira sweeps him over and uses the opportunity to stand back up. Davis wastes little time trying for more single-legs, failing on the first attempt but succeeding with the second. Again Davis tries to work from half-guard, but Nogueira is stifling his offense off his back. Davis postures up in Nogueira's open guard and lands a couple punches before the Brazilian gets wrist control again. As the final seconds tick away, the crowd is not thrilled with the effort from these two, and it lets them know. MMA Fighting scores the round 10-9 for Davis.