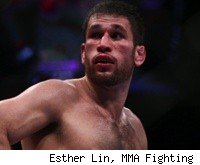 SEATTLE, Wash. -- This is the UFC Fight Night 24 live blog for Amir Sadollah vs. DaMarques Johnson, a welterweight bout on tonight's UFC on Spike TV event at the Key Arena.

Round 1: Sadollah goes right to work with leg kicks, but Johnson seems intent on throwing a punch to counter each one. An uppercut by Johnson makes Sadollah stumble, and Johnson puts the pressure on. Sadollah slips on a head kick attempt and Johnson briefly gets side control before Sadollah works back to his feet. After a brief pause following an accidental groin kick by Sadollah, Johnson grabs one of Sadollah's legs for a takedown. Johnson works hard to try and pass the guard, but eventually gives up and gets to his feet. Back in the center of the cage, Johnson fires a hard jab that lands cleanly. Sadollah backs him up against the fence and lands a punch just as Johnson throws a knee, and the off-balance Johnson goes down. Nice throw by Johnson after getting back to his feet, but Sadollah is up quickly and gets a takedown of his own. The round ends with Sadollah posturing up in the guard and throwing punches with mixed success. MMA Fighting scores it 10-9 for Johnson.

Round 2: Two good right hands by Johnson start off the round, but Sadollah keeps coming forward. Sadollah backs Johnson up against the fence and unloads. Johnson looks slightly hurt, but he fires back to stop the onslaught. Johnson hammers Sadollah with a right hook that knocks Sadollah to one side, but Sadollah takes advantage of Johnson's fatigue and gets him down against the fence. Sadollah is raining down blows from the top, and this one may be stopped. Johnson takes it, and somehow gets out of danger in time, only to be swarmed further as Sadollah takes his back. Sadollah ties Johnson's arm up from mount and unleashes some brutal elbows. Johnson is tapping, and this one is over.

Amir Sadollah def. DeMarques Johnson via submission (strikes) at 3:27 of round two