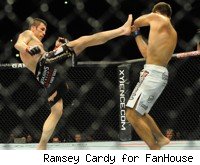 In what may have been his most impressive performance in the Octagon to date, former Ultimate Fighter winner Amir Sadollah put a serious hurting on DaMarques Johnson at UFC Fight Night 24 on Saturday night, forcing him to tap out as he rained down vicious elbows on the ground in the second round.

Sadollah showed off precision punching in the stand-up, some good takedowns and a killer instinct when he had Johnson in trouble in the second round. It was a great showing for Sadollah, although Sadollah made a point to credit Johnson for taking the fight on short notice.

"I want to say a huge, huge thank you to DeMarques," Sadollah said afterward. "He took this fight on two weeks' notice, which a lot of guys wouldn't have done. I have a lot of respect for him."

It's hard not to have a lot of respect for Sadollah after the way he fought.

Sadollah briefly struggled in the early going: He appeared to slip on the Bud Light logo in the middle of the Octagon while throwing a kick early in the first round, and Johnson got on top of him. Sadollah was able to shake Johnson off and get back to his feet without taking any punishment, but it wasn't long before Johnson caught a Sadollah kick and put him on his back again. Later in the round Johnson would utilize a great throw to put Sadollah on his back, and Sadollah would show off a textbook takedown to put Johnson on his back. That's how the first round went, they'd go to the ground and get back up, and neither fighter had much of an advantage.

But the second round began with a brutal stand-up exchange, with Sadollah landing some hard knees to the body in the clinch and following with several punches, while Johnson could land only a few punches of his own. Sadollah was getting the better of the exchanges, and when the fight went to the ground Sadollah went to town, getting into full mount and raining punches down. When Sadollah switched to elbows and controlled Johnson's wrist so that Johnson couldn't block those elbows, Johnson tapped out to save himself.

Sadollah has had an up-and-down career in the UFC, and he has looked at times like a guy who's getting overly promoted because he was a reality TV star. But you can't argue with the way he fought on Saturday night: Sadollah looked great.