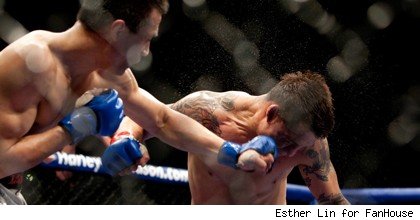 In a rematch of one of the wildest, craziest slugfests in mixed martial arts history, Chan Sung Jung forced Leonard Garcia to tap out with just one second remaining in the second round of their fight Saturday at UFC Fight Night 24.

Although this fight wasn't quite the memorable battle that their first fight was, it was entertaining. And the result was more satisfying: In their last bout, Garcia won a highly questionable split decision. But this time around Jung took it out of the judges' hands, using a nifty twister submission on Garcia to secure the submission victory.

It was the first twister submission in UFC history.

Garcia opened the fight well with some kick-punch combinations, but at the midway point of the first round Garcia took it to the ground, and from there he took control, hammering away at Garcia and finishing the round on Garcia's back, raining punches down on him. It was a good round for the Korean Zombie.

In the second round they got a little more creative with their striking, as both Garcia and Jung attempted flying knees in addition to the punches and kicks they had thrown in the first. With a minute to go Jung knocked Garcia down and got on top of him on the ground, and then he went to work. Jung got Garcia's back, controlled Garcia's left leg and twisted him to the right, and the pain was too much for Garcia, who tapped after 4 minutes, 59 seconds of the second round.

Jung said afterward that he felt vindicated after his disappointing loss to Garcia last year, and that he had always wanted to win a fight with a twister. It was a great showing for Jung, and a great way to start the Fight Night on Spike TV.