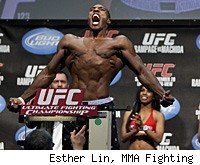 SEATTLE -- All fighters made weight at the Key Arena on Friday afternoon, clearing the way for UFC Fight Night 24 to take place as scheduled on Saturday night.

Though all eyes were on Anthony Johnson, who admitted he'd gotten up to sixty pounds over the welterweight limit while being sidelined with an injury, "Rumble" came in on target with help from the one-pound allowance, which his opponent, Dan Hardy, also took full advantage of. Full results from Friday afternoon's weigh-in are below.