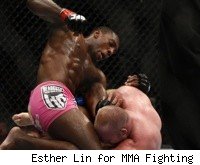 The UFC is wrapping up a busy March with a big Fight Night card on Saturday night in Seattle, with a light heavyweight fight featuring an aging veteran against a young prospect in the main event, and three very intriguing undercard matchups. We've got the preview and predictions right here.

When: Saturday, the Spike televised card begins at 10 PM ET

Antonio Rogerio Nogueira vs. Phil Davis
When Tito Ortiz pulled out of this fight with an injury, Nogueira got a very bad deal: A match against a much less recognizable name who also happens to be a much better fighter. Davis isn't the draw with casual fans that Ortiz is, but at this stage in his career he's one of the real up-and-comers at 205 pounds and a far more difficult opponent for Nogueira to handle.

In fact, it's hard to see just what Nogueira can do to handle Davis: In Nogueira's last fight, Ryan Bader used his superior wrestling to control him and win a lopsided unanimous decision, 30-27 on all three judges' cards. Davis is a lot like Bader, except that Davis, who won the NCAA wrestling championship at Penn State three years ago, is a better wrestler than Bader.

I don't want to count Nogueira out, because he's the best opponent Davis has faced, and because he's good enough off his back that Davis can't afford to get sloppy on top. But realistically, I see this as a fight that it's very unlikely Nogueira will win.
Pick: Davis

Dan Hardy vs. Anthony Johnson
Hardy is trying to bounce back from a tough 2010 in which he was dominated by Georges St. Pierre for 25 minutes of a welterweight title mismatch, then was knocked cold in the first round by Carlos Condit. Johnson, meanwhile, is trying to shake off the ring rust: He hasn't fought in almost a year and a half because of a major knee injury.

I see Johnson as the more talented fighter of the two, but I question whether he'll be ready for this fight. I also think he's going to have a very tough time with the weight cut, as he has in the past -- Johnson is huge for a welterweight and may struggle to make 171 pounds. I like Hardy to pull the upset.
Pick: Hardy

Amir Sadollah vs. DaMarques Johnson
This is the kind of match-up the UFC likes to book on Spike because both are well known to the Spike audience: Sadollah was the Ultimate Fighter 7 champion, while Johnson lost in the Ultimate Fighter 9 final. Neither one of these guys has much of an upside as far as becoming a relevant competitor in the upper echelon of the welterweight division, but this is a fine matchup as far as it goes, and I like Sadollah to take it.
Pick: Sadollah

Leonard Garcia vs. Chan Sung Jung
In a rematch of the sloppy, bloody battle that took place in the WEC last year, Jung and Garcia will stand toe-to-toe and throw bombs at each other for another 15 minutes. Last time around I thought Jung deserved to win and Garcia benefited from a bad decision; this time I think Jung does enough to convince the judges to give him the nod.
Pick: Jung