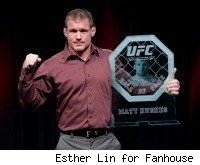 Former UFC champion Matt Hughes left the Miletich Fighting Systems team to open his own gym, the H.I.T. (Hughes Intensive Training) Squad back in 2007. On Wednesday, it was announced that former Strikeforce welterweight Jesse Finney has bought the gym and renamed it "Finney's HIT Squad."

But strangely, a day before the purchase was made official, Hughes blogged only of a change in management.

"The H.I.T. Squad is going through some changes right now," Hughes wrote. "I have not sold any of my share of the H.I.T. Squad, but there is a change in management. I know what got me where I am today and I didn't get here from running a gym. That's always been somebody else's job and we've got somebody else doing that right now."

A source close to the situation tells MMAFighting.com a main backer along with Hughes, Robbie Lawler, trainers Marc Fiore and Matt Pena each held shares in the gym. Not all owners were contacted about the sale, the source says.

When asked for comment, Finney reiterated Friday that he is currently the sole owner of the gym.

"I don't know Matt's arrangement with the old backer, the financial backer of the gym," Finney told MMAFighting.com. "[Hughes] might still be involved in that way. Now as far as ownership goes, I am the owner, 100 percent."

According to Finney, Hughes will remain with the HIT Squad.

"Matt is continuing to still work out there," Finney said. "He's still going to continue to train there and run some practices, running some training, classes and stuff like that."

Finney, who also owns Finney's MMA in St. Louis and and 68 Inside Sports in Overland Park, Kan., holds a professional MMA record of 6-1 and was twice victorious on Strikeforce undercards in Miss. As the new owner of HIT Squad, the 36-year-old Finney is ready to hang up his gloves. His last fight was a submission loss to UFC veteran Josh Neer last August at a local event in Missouri.

"With this purchase, it's pretty much solidified my fighting career," says Finney, who also promotes fights under Shamrock MMA. "I'm done, as far as fighting goes."

The HIT Squad is home to UFC competitors Kyle Watson and Brian Foster. Heavyweight Jon Madsen, who fights this Saturday at UFC Fight Night, was also a notable member of the HIT Squad, but left for Brock Lesnar's Death Clutch team.

Although Hughes and Lawler were the main names attached to the H.I.T. Squad gym during launch, the two have drifted elsewhere when it came to their MMA training camps. Hughes works out of the H.I.T. Squad inbetween fights, but for his actual camps, trains with former MFS alum Jeremy Horn at Horn's Elite Performance MMA in Utah and with Lawler and Pena. Meanwhile, Lawler has been training out of Power MMA and Fitness in Gilbert, Ariz., the gym Ryan Bader, C.B. Dollaway and Aaron Simpson opened up after leaving Arizona Combat Sports.