Friendship Aside, Anthony Johnson and Dan Hardy Eager to Slug It Out 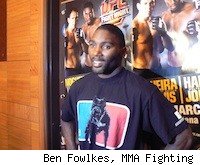 SEATTLE -- Here's how you know Dan Hardy and Anthony Johnson are buds: Hardy can make fun of Johnson's weight, and Johnson can make fun of Hardy's face, and yet at the end of the day they can still smile and agree to try and knock each other unconscious like gentlemen.

"We're cool," Johnson said of Hardy during Thursday's UFC Fight Night 24 workouts. "I saw him last night. I came in and got a workout in and I saw some dude, ugly with crazy hair, and I started squinting. I was like, oh sh-t, that's Dan. I came up to him and gave him a hug, chatted for like a minute, and said our goodbyes and split. I mean, we're friends right now, but obviously we have something to do. We're not here to chit-chat; we're here to handle business. But we still show each other that mutual respect."

In a week where a fight between two former training partners has been the dominant story, maybe there's a lesson here. Hardy and Johnson don't spar together or share the same coaches, but they do have an amicable relationship. Still, why should that prevent them from fighting over a pile of money?

On fight week, Hardy said, "[Johnson] stops being a friend and he starts being an opponent. That's exactly where I'm at now. We can be friends on Saturday night, after he's woken up, but right now he's the enemy."

Hardy's only regret is that "Rumble" has made for the kind of enemy who won't play the trash talk game with him in the lead-up to the bout. Not that Hardy hasn't given it a go, mind you.

Though he said it doesn't matter to him what Johnson weighs, he continued to poke fun at his opponent's weight on Thursday. Unfortunately, Hardy lamented, "He's not really bitten on anything. I'm sure he's too tired from cutting carbs."

Johnson refused to tell reporters what he was weighing just 24 hours before stepping on the scales, but insisted it wouldn't be a problem for him to make the 170-pound limit even though he'd gotten up to 231 pounds during his time off.

"I was out for a year, and I got heavy," Johnson said. "I got lazy. I had surgery, and I got fat for a second. But now I'm lean and trim and keeping it sexy."

As for those who doubt him? He had a message for them too.

"There's a lot of haters out there, everybody thinking I'm not going to make weight, but I like that. That just keeps me motivated. So all you haters, I welcome you. Keep doubting me, keep coming, I need you in my life."

More than his weight, the time away from the cage seems like a more significant potential problem for Johnson. His last fight came in November of 2009, when he lost via second-round submission to Josh Koscheck.

While Johnson said ring rust was "the last thing on [his] mind," Hardy wasn't so quick to write it off.

"It would affect me, definitely. I mean, I only fought twice last year and I felt like I sat on my a-- for the last year, and I was in the gym every day."

When asked what came to his mind upon hearing that Johnson had let himself get a full sixty pounds over the welterweight limit, Hardy responded: "Burger King. Pancakes. Cookies. That's a huge weight. I saw some photographs of him, and he was a fatty. You know, he got fat, had a head like a basketball. That's all on him. That's something he's got to deal with. I wouldn't like a weight cut like that."

They may differ on whether weight or ring rust are going to be an issue, but one thing both men agree on is that it isn't going to be a grappling match when they meet on Saturday night.

"Absolutely no chance," said Johnson. "It's not happening. I want to punch Dan between his eyes. He wants to punch me in my eyes and my mouth and everywhere else he can, so that's how it's going to be."

Hardy claimed his love of standing and throwing leather remains undiminished after the first knockout loss of his career in his last fight against Carlos Condit. But at the same time, he said, he knows he needs a win to stay viable in the division.

"The problem is, the situation I'm in now is I'm coming off two losses," Hardy said. "Regardless of how the fans and the UFC view me, I feel like I'm fighting for my job. I've got to be a little bit smarter about it. I can't walk forward with my head in the air and throw punches, because obviously I know he's got power. I know he's a big, strong guy.

"But at the same time, I don't fight because I want to make money," Hardy continued. "I fight because I enjoy fighting. I only do this because I like hitting people, and that's the reality of it. This is the only place I can do it without getting in trouble, so if I get an opportunity to go in there and throw punches with someone I'm going to do it, regardless of the outcome."

Buddies or not, these two are both in desperate need of a win. And as long as Hardy is still standing across from him trying to take his head off, Johnson said, he's no friend at all.

"Me and Dan are cool. Obviously, we're trying to handle this like men. We don't have any bad blood; we're just two fighters who want to fight. He likes to slug it out. I like to slug it out. I have nothing bad to say about the guy. He's a friend, you know? He's a friend until that cage door closes. Then he's something else."