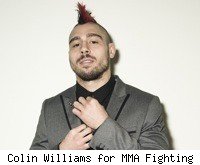 During the early portion of Dan Hardy's UFC career, he was considered by some to be just another British brawler.

But when last year's UFC Primetime: St-Pierre vs. Hardy series aired footage of the time Hardy spent in Northern China training with Shaolin monks, "The Outlaw" began receiving more respect from the MMA community for being a true mixed martial artist.

On Thursday, Hardy showed just how much respect he has for the history of martial arts when he visited Bruce Lee's grave at Lakeview Cemetery in Seattle, Wash. The visit was so moving, it brought the 28-year-old Hardy on the verge of tears.

"I don't want this to sound disrespectful," Hardy told The Seattle Times, "I kind of treated it as a bit of a sightseeing kind of thing, to come and see Bruce Lee's grave just to say that I've been there and done it. But to be here, I don't know, I kind of got something else from it."

Lee died in 1973 at the age of 32. He is considered by many to be the pioneer of the mixed martial arts movement before anyone even knew what MMA was.

"To only live such a short time, and to contribute so much, and to be inspiring people that were born many years after him, it's just amazing," he said. "I mean, we all aspire to something like that. I would love to be able to contribute something, even just a fraction of what he contributed to martial arts."

Hardy, who faces Anthony Johnson at UFN 24 on Saturday night, began training in martial arts when he was six years old. He credits the "Teenage Mutant Ninja Turtles" for being the reason why he wanted to get involved in martial arts in the first place, but from watching the video below, courtesy of The Seattle Times, and listening to him speak of Lee's influence on his life, it's clear that Lee had more of a profound impact on Hardy the fighter and man than Donatello or Raphael.