A Day in the Life of 'Mr. Wonderful' 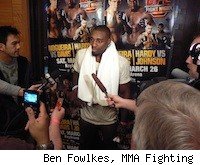 SEATTLE – We're having a pleasant little breakfast when Phil Davis offers to "dislocate" his nose. No big deal, he says. Just a trick of the cartilage that leaves it looking twisted and mangled and, well, awesome.

It's a great party trick he's developed over the years thanks to old wrestling injuries and the peculiarities of his personal physiology and hey, as long as we're just sitting here, would I like to see it?

Answer: of course I would.

So Davis puts both hands up to his nose, feeling around for just the right spot, then crack. The sound is like someone snapping a pencil in half.

Here's where my mind drifts off into worst-case scenario mode. I imagine Davis leaving the restaurant with a bloody cloth napkin pressed against his face. I imagine dour athletic commission officials examining the nose and shaking their heads in disapproval. I imagine someone from the UFC asking me, 'Is it true you encouraged one of our main event fighters to break his own nose two days before the fight, purely for your own amusement?'

There's no way for this to end well.

'Nah, I'm just messing with you,' he says. He takes his hands away, and nothing. His nose is unscathed as it was when we sat down, and a gotcha smile stretches across his face. It's a trick of the wrist, he explains. He can snap it hard upon command, creating both the sickening sound and the visual impression of something important giving way. Apparently I'm not the first person he's fooled with this.

The worst part is that after what we've already been through this morning, I really should have seen this coming.

The day began with a 5:30 a.m. call for "Mr. Wonderful." Even though he has the biggest fight of his career against Antonio Rogerio Nogueira at UFC Fight Night 24 on Saturday night, there's still PR work to be done. Since Davis is the handsome, articulate, native English-speaking half of the main event, the burden falls on his shoulders when a local news crew wants to shoot a live segment promoting the fight.

The set-up ought to be familiar. Channel 5's Christie Johnson – a professionally perky blonde in designer sweats – gets a quick tutorial in the leg trip and the armbar on the mats in the hotel ballroom. They go through it a couple times in slow motion, but once it's time to do it live Davis throws himself down with the gusto of a pro wrestler and then writhes frantically on the mat as Johnson applies the armbar.

Let it never be said that Davis isn't a good sport.

Between the live segments though, Davis and his training partner, Jared Platt, can't help but have some fun of their own at Johnson's expense. It starts when Johnson mentions something about an upcoming exhibit at Seattle's Museum of Science Fiction. Platt – a hulking ex-college wrestler with a bushy beard to offset the lack of hair on his head – immediately launches into a story about what a tremendous Star Wars nerd he is, naming memorabilia he owns in a list that gets less and less believable as it goes on.

The morning show reporter is buying it, right up until Davis takes it a step too far.

"He has a model Death Star in his bedroom," he deadpans. Johnson looks at Davis, then at Platt, who's doing his best to nod gravely. Wait a minute, you can almost hear her thinking. The jig is up. Abandon ship. 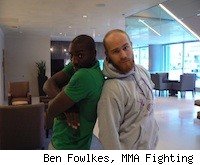 Davis and Platt have known each other since their college days at Penn State, which helps them work together on a joke like an experienced Vaudeville team. Platt insists it's his ability to keep up with Davis in the humor department more than his fighting abilities that has earned him a spot in Davis' corner. Although, he doesn't mind telling me, he does do a pretty great Nogueira impression.

"The zombie legs are key," he says, getting up and mimicking the Brazilian's stiff-legged stance. I have to admit, it's pretty much dead-on.

But make no mistake, it's not like they're taking Nogueira lightly. In fact, they may be the only ones who aren't. No matter where Davis goes or who he talks to this week, it seems like he can't escape the questions about new light heavyweight champ Jon Jones. Could Davis be the one to beat him, reporters want to know. How does he see that fight going down?

It's gotten to the point that Davis' team jokingly calls for everyone to do shots whenever Jones' name is mentioned. It's the kind of thing that can really confuse a gullible waiter at breakfast.

"No, I think you guys are fighting next," Platt says. "April 1st, I think I heard. You and Jon Jones."

The truth is that Davis knows Nogueira, with his boxing skills on the feet and jiu-jitsu skills on the mat, represents the most dangerous and experienced fighter he's faced in his eight-fight pro career. All the kidding around before the fight isn't meant to obscure that fact so much as keep him from dwelling on it and succumbing to the pressure. These are techniques you learn when you're a decorated college wrestler.

"I remember I had [wrestling] matches in college where I lost bad – maybe not in terms of points – but still bad," he says. "And I know that I could not have won those matches. There were adjustments I still needed to make and things I still needed to learn. I wouldn't have won them just by sitting up in my hotel room with my arms crossed before the match."

In other words, by the time you're eating breakfast at the Hyatt on fight week, your fate is more or less already sealed by what you did in training. Davis just has to hope that he did enough, and enjoy the ride in the meantime.

After a nap to refresh himself following the early call, Davis' day ends with a PR obligation of a different kind: the open workout. Here's where Platt earns his keep, playing the role of pliant grappling dummy as Davis stretches him all over the mat back in the same hotel ballroom that the day started in.

At first Davis is mainly working position, stifling the bottom jiu-jitsu game and getting himself into a good spot to rain down elbows. Then he starts working on some of his favorite chokes, and he won't stop until he can hear Platt gurgling.

"Now you're just being mean, Phil," says fellow teammate and UFC bantamweight champ Dominick Cruz, who's watching from the edge of the mat. There's no suggestion that Davis should stop being mean, mind you. It's more of an observation, really.

But then Davis stops his torment of Platt suddenly and peers down into the crack between the mats.

"Hold on, guys," he says, delicately reaching down for something.

It's a ladybug. Phil Davis has stopped everything to save an insect. At first it sounds like another gag, like he's just waiting to see who will bite on this one. But then he's lifting a small red dot up out of the danger zone and walking over to deposit it in a potted plant in the corner of the room.

"I can't just let it get crushed by me and some Neanderthal," he says afterwards, gesturing at Platt, who already has his hands up in the classic what-did-I-do? posture (although later, there will be some debate as to whether Davis said 'Neanderthal' or 'Newanderthal,' the latter being a label Platt would actually wear with pride). "...I'm doing ground-and-pound and I see a ladybug there. It's a sign, screaming, 'Save me, Phil. I don't want to die here, in the crack of a mat.'"

The parallels between Jon Jones' much-publicized act of recent heroism and Davis' small act of kindness are not lost on the media in attendance, of course. Jones apprehends muggers, but Davis cares even for the least among us. What does it all mean?

Davis shrugs. "I save ladybugs. It's a small job, but I enjoy it."

That's all. He flashes a look that says, Go on. Mention Jon Jones again. The look says, Give us a reason to order more imaginary shots. It says, Try to make this into one more overly symbolic moment in a hypothetical match-up that may or may not materialize. By all means, do it, the look says. I love a good laugh.