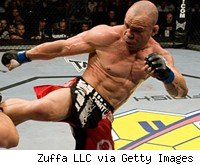 Implementing one set of rules everywhere is a worthy goal and a positive step toward mainstream acceptance of MMA around the world. But while the UFC is set in its ways of using the unified rules, some folks in MMA think the unified rules should look a little more like the rules used in Pride.

That includes Wanderlei Silva, who fought most of his career using Pride or Brazilian vale tudo rules but has spent the last three years in the UFC. Michael Schiavello asks the "Axe Murderer" on the upcoming HDNet show The Voice vs. Wanderlei Silva which rules from Pride he'd like to see in the UFC, and Silva said he'd love to be able to use knees to the head on the ground inside the Octagon.

Silva realizes that to some eyes, kicks to the head on the ground just look too violent. But he said knees on the ground are a necessary tactic. Without them, it's too easy for a fighter to drop to the ground simply to avoid punishment.

"Kicks on the ground, maybe no, but I think guys need to use knees on the ground because sometimes guys will just put their four points on the ground so you can't hit them," Silva said. "I think in the future if I could change some things, I would allow knees to the ground and maybe take out the elbows."

The interview with Silva will air Friday night on HDNet (I've seen an advance copy), and it's a fascinating look at Silva's career. But Silva's idea that the UFC should allow knees to the head on the ground but take out elbows is particularly notable now because it's exactly what UFC President Dana White was asked about during a chat with the Seattle Times this week.

White, however, said he's strongly opposed to such a rules change.

But I also think Silva had it exactly right when he told Schiavello why he thinks two old Pride favorites -- stomps and soccer kicks -- will remain illegal.

"I like it but I think it's so aggressive that it might be too much -- soccer kicks might also be too much. I like them, but they may be too much," Silva said. "In some places in the world MMA is still illegal."

As long as MMA is still fighting to be legalized at all in some places, the sport should keep the unified set of rules it has. Some day, however, when MMA has achieved mainstream acceptance, changes to the rules should be considered. And Silva is right: One of those changes should be allowing knees to the head on the ground.