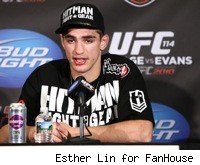 The UFC has once again raised its own bar. After previously announcing a pair of free preliminary card fights for UFC Fight Night 24 would be streamed live on Facebook, the company has upped the ante to five – apparently thanks to some social media pressure put on company president Dana White.

Posters on The Underground forum started an impromptu campaign asking White, via the message boards and Twitter, for more fights on Facebook. After scheduling two earlier in the week, the UFC boss came through and added three additional to the stream.

In addition to the previously planned bouts between Jon Madsen-Mike Russow and Alex Caceres-Mackens Semerzier, the UFC will now stream Sean McCorkle-Christian Morecraft, Edwin Figueroa-Michael McDonald and John Hathaway-Kris McCray. To gain access, viewers must "like" the UFC on Facebook, which then unlocks a live streaming video player on the fan page. The UFC currently has more than 5 million fans at the social networking site.

The UFC first began utilizing Facebook to stream unaired prelim fights in January at the Fight for the Troops 2 show at Fort Hod, Texas. For that card, two bouts were planned for Facebook. But on the night of the fights, the UFC announced two more would air – a total of four leading into the five-fight card on Spike.

The promotion has continued airing fights for free at Facebook each event since then – but never as many as the five that will air on Saturday, which beats its previous high of four at the Fight for the Troops show.

Between main card broadcasts and prelims on a combination of Spike TV, Ion Network and Facebook, the UFC has made it possible for fans to see the majority of fights on its cards. At UFC 127 last month, between Facebook, Ion and the pay-per-view, 11 of 12 bouts were aired (Mark Hunt's win over Chris Tuchscherer, the second fight of the night, was added to the pay-per-view broadcast as a filler fight). Last Saturday at UFC 128, and again this Saturday, nine of 12 bouts are guaranteed a broadcast of some kind.

UFC Fight Night 24 takes place at the Key Arena in Seattle and marks the UFC's debut in Washington. In addition to the main event between Nogueira and Davis, the main card includes a co-main event welterweight between Anthony Johnson and Dan Hardy; the featherweight rematch of the 2010 Fight of the Year between Leonard Garcia and Chan Sung Jung; and a welterweight bout between Amir Sadollah and DaMarques Johnson.