Sean McCorkle: UFC Pays Me More Than They Have To 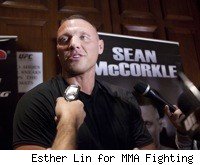 Considering how much Sean McCorkle talked prior to his UFC 124 fight against Stefan Struve last year, it was a little surprising to see "Big Sexy" remain relatively quiet in the weeks leading up to his UFC Fight Night 24 fight against Christian Morecraft.

Sure, there were a few tweets and videos posted, but nothing close to the verbal assault he unleashed on Struve.

"I really just didn't want to go into reruns," McCorkle (10-1) said on Monday's episode of The MMA Hour. "I didn't want to do the same thing I did last time. I think you and I talked about that, how it might wear thin."

Amazingly, Morecraft (6-1) whose only fight in the UFC is an August loss to Struve, initiated the trash-talk after the fight was announced by posting a video on YouTube mocking McCorkle.

"Especially since it was going to take place on Internet, I was a little surprised. It was funny to me; it wasn't insulting. Of course, nothing insults me."

McCorkle is 1-1 in the UFC, and he is fully aware that a bad performance on Saturday night could lead to the end of his UFC run.

That's not to say that the organization hasn't treated him well thus far. In fact, McMorkle was given his win bonus after his lackluster performance against Struve in December.

"They pay me more than they have to pay me. I got my win bonus against Struve, even though I didn't win or fight very well at all. They sent that to me anyway, hopefully they didn't care that I put that on blast."

McCorkle was never given a specific reason as to why he was given his win bonus for a first-round loss, but he thinks it has something to do with the hype he generated prior to the fight.

"I talked to my agent about [why he received a win bonus], he said, Probably more for your hype than the way you fought.

"I expected nothing after that fight. I didn't expect any bonus, anything. It showed up a couple of days before Christmas."

So while he won't necessarily admit it, McCorkle seems to be taking the "let my fighting do the talking" approach this time around, even though he doesn't seem to be too fond of this fighting thing altogether.

"I'm just enjoying the ride while it's here. I enjoy everything but the fight. The fight kind of sucks, to be honest with you. I don't really enjoy getting punched, but everything else about being in the UFC is awesome."

(Ed. note: Watch McCorkle's appearance on The MMA Hour below.)