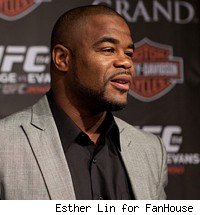 Greg Jackson may be committed to staying neutral when former teammates Jon Jones and Rashad Evans fight over the UFC light heavyweight belt, but striking coach Mike Winkeljohn is making no such promise.

A former kickboxing champion who has for the last four years taught striking out of Jackson's Albuquerque, New Mexico-based gym, Winkeljohn said he doesn't feel the need to stay out of the forthcoming title fight.

"I'm positive I'm going to be working with Jon Jones because, well, the kid didn't do anything wrong," Winkeljohn told MMA Fighting. "We have a good relationship."

As for Evans? He might feel as though he's been betrayed by the Jackson's MMA team, but the way Winkeljohn sees it, Evans is expecting a loyalty that he hasn't demonstrated himself.

"I've had some of my best coaching moments with Rashad Evans. ...Kicking Sean Salmon in the head and knocking out Chuck Liddell, you have these cool moments after the fight where you know that what you worked on unfolded just perfectly. And it was great. Things were going well."

"There were a lot of distractions, a lot of extra people in Rashad's ear, him not believing in our game plan. And [against Machida] he just had one of those nights where he didn't perform anywhere close to what he was capable of. All fighters have those nights. It just happens. He had a bad night, the night was over, and maybe I made a mistake by not consoling him enough. I know that I was the type who, when I lost a fight, I just wanted to be left alone. I kind of misread that a little bit, but he just didn't do any of our game plan at all. Then he left. He went on the 'Ultimate Fighter' show, he didn't call, and that was it. Then Jon Jones comes in."
But in my mind, if I was fired by Rashad, I don't think I should take myself out of another job just because I used to work with the guy that fired me.
-- Mike Winkeljohn
At first, Winkeljohn said, he held back on working with Jones. He tried to gauge Evans' feeling about the situation, but got no response.

"I said, 'My work is with you and Keith Jardine first.' No response. Long story short, he did two more fight camps, I was never called, never invited to help."

Evans began doing more of his pre-fight work at Trevor Wittman's Grudge Training Center in Denver, Winkeljohn said, partly in an attempt to focus more on his wrestling. It wasn't so much an angry split, but rather a dissatisfying drift. Winkeljohn didn't hear much from Evans and he saw him even less.

"I wasn't discouraged, and hey, I like the guy," said Winkeljohn. "But Jon Jones has wanted to work with me and his stand-up has come a long way. He's looking tremendous. But in my mind, if I was fired by Rashad, I don't think I should take myself out of another job just because I used to work with the guy that fired me."

Which is not to say that the two are at odds, Winkeljohn said. He talked to Evans as recently as two weeks ago, and it was an amicable conversation in which both expressed gratitude and respect for the other, he said.

"Rashad's one of the most intelligent, respectful guys I've ever met," said Winkeljohn. "He's welcome in my house any time."

It's just that, when it comes to title fights, he doesn't see any reason why fighters in their primes should take themselves out of the running. Teammates face each other on collegiate wrestling teams and on Olympic boxing squads, he pointed out. Sure, there has to be a winner and a loser, but that's the nature of the sport – even if he understands why Jackson doesn't want to be a part of any fight between teammates.
I think it's an unfortunate series of events that's going to happen more and more.
-- Mike Winkeljohn
"Greg, I think, will step out of it," Winkeljohn said. "That's his philosophy, and bless his heart. But the sides were chosen a ways back. I feel bad saying that, but I don't want to look like a bad guy and I don't want [the Greg Jackson team] to look like a bad guy. Rashad lost to Machida, and he basically left. I know he left me, so that's how I feel. Choosing sides? I don't know if that's the term for it, but he made that choice. I didn't make that choice."

Regardless of who set this chain of events in motion, there seems to be no stopping it now. Evans has sought his training elsewhere and Jones will likely continue on in Albuquerque. All the team can do is try to learn from the situation, and see what happens as a result of it.

"A lot of us are to blame," said Winkeljohn. "I think it's an unfortunate series of events that's going to happen more and more. Everybody wants a title. Bringing Jon Jones in, you know, if we would have known ahead of time that this would happen, we might not have brought him in. I don't know, it's tough. But I don't know if that's why Rashad left, or if it was because he didn't trust us after he lost to Machida. Maybe it was a combination. I don't know. I care about both guys and if there's anybody out there who has the tools to beat Jon Jones, it's Rashad Evans. If he uses them and he shows up mentally prepared, Jon Jones is in for a long night."