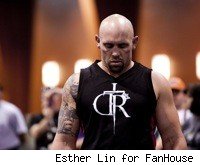 The waiting game is over for Shane Carwin. The onetime UFC interim champion finally has an opponent, as UFC president Dana White revealed during a Seattle Times live chat that Carwin would face octagon newcomer Jon Olav Einemo.

The 35-year-old is a member of Team Golden Glory and has a 6-1 record in MMA, though he has not fought over four years.

Einemo made his MMA debut in 2000 and competed once in PRIDE, losing to Strikeforce star Fabricio Werdum. He abruptly quit the sport after a Nov. 2006 win over James Thompson.

The 6-foot-6 Norweigian is the only man ever to beat multiple-time BJJ champion Roger Gracie in the Abu Dhabi Combat Club tournament. A renowned submission grappler, Einemo captured the 2003 ADCC tournament after defeating Gracie in the semi-finals of the 88-98 kg weight division.

Carwin, meanwhile, is returning from surgery to address neck, back and nerve problems. He has not fought since his UFC 116 championship loss to Brock Lesnar.

A source with knowledge of the situation told MMA Fighting that the UFC had expected to pair Carwin with the winner of this Saturday's fight between Mike Russow and Jon Madsen until going to plan B.

UFC 131 takes place on June 11 and emanates from the Rogers Arena in Vancouver, British Columbia.