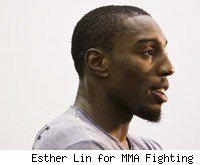 He's not the only one.

Since Jones won the belt on Saturday, and to a degree even before UFC 128, media, fans, and even fighters have pegged Davis as the man who could give the unstoppable Jones trouble inside the Octagon.

That's a huge compliment for a 26-year-old who only made his MMA debut in October 2008.

But Davis (8-0), who faces Antonio Rogerio Nogueira in the main event of UFC Fight Night 24 this Saturday, says he isn't concerning himself with anything other than what's next.

"I don't really think so much about fighting guys until I'm scheduled to fight them," Davis said on Monday's episode of The MMA Hour. "Right now, I'm thinking about Little Nogueira and after I fight Little Nogueira then I'll see who I'm scheduled to fight next. That's really how I take it. I don't worry about ... I just really don't get into it. There's no reason to assume you are going to fight someone. You know, it kind of starts that feeling of awkwardness, if you do, when you see that person. I just fight whoever I have to fight. That's it."

Davis made his UFC debut in February 2010. Since then he has notched wins over Brian Stann, Alexander Gustafsson, Rodney Wallace and Tim Boetsch. He was scheduled to fight Matt Hamill, then Jason Brilz, at UFC 129, but was moved to UFN 24 after Tito Ortiz pulled out due to a head injury.

The UFC has brought Davis along nice and slow. A similar approach to the one they used with Jones. But if Davis gets by Nogueira, the calls to see a Jones vs. Davis title fight will undoubtedly get louder from all corners of the MMA community.

"It's good that they are looking at me. I appreciate that. That's great. I mean, one day I would love to fight for the belt. I just need to get there."

(Ed. note: Watch Monday's episode of The MMA Hour below.)