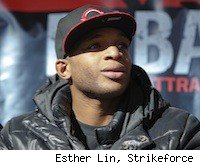 Nick Diaz vs. Paul Daley, the most anticipated welterweight title fight in Strikeforce history, is officially happening on April 9.

Diaz's manager and trainer, Cesar Gracie, confirmed with MMA Fighting that the British slugger signed the bout agreement on Tuesday, thus ending speculation that "Semtex" would pull out of the fight.

Diaz vs. Daley had already been announced by the promotion, but after Zuffa purchased Strikeforce two weeks ago, Daley hinted online that he may back out of the title fight given his previous relationship with UFC president Dana White.

"Business as usual," Daley wrote on the Underground forum, "what if I don't want to fight for Dana White/Zuffa?"

"Dana white bans me for life from the UFC, Then buys STRIKEFORCE, and thinks im still gonna be EASY and fight on one of the most anticipated fights of the year (vs Diaz)? Which will no doubt make ZUFFA/Dana White money.

Even though White banned Daley from the UFC after Daley punched Koscheck after the bell at UFC 113, the UFC president has said that he will honor Daley's existing contract with Strikeforce despite his feelings towards "Semtex."

When asked at the UFC 128 post-fight press conference about Daley's involvement on the April 9 card in San Diego, White didn't seem worried about his threat to pull out of the title fight.

"Paul Daley has a contract, so it would be a good idea if he did [sign the bout agreement]," White said with a smirk.

Good news: he did.