Greg Jackson Staying Out of It, but Disagrees With Jones-Evans Fight 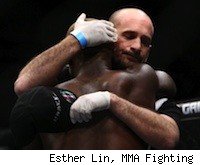 The way MMA trainer Greg Jackson sees it, it's sadly ironic that his phone should be ringing off the hook a few days after adding a new UFC champion to his stable of fighters, and yet so few people are interested in talking about the fight.

Yes, Jon Jones dominated "Shogun" Rua to become light heavyweight champ, and yes, it would be nice if Jackson got a day or two to savor his fighter's victory. But that's not how it works this time. Not after Rashad Evans, a former UFC champion from the Jackson team, agreed to fight Jones just before declaring himself "done" with Jackson's team altogether.

After inter-squad drama like that, all anyone wants to know is what exactly happened between Jackson and Evans to bring them to this point. The trouble is, Jackson isn't entirely sure.

"I love Rashad to death," he told MMA Fighting this week. "I'm not sure why he's angry at me. I guess I can see from a perspective, that isn't really the way it is, why he's angry, but I don't have any animosity towards him. I've always tried to help him out. I was with him right after he won that reality show all the way to his world title. I'm not sure what it is."

To hear Evans tell it, Jackson brought Jones on the team against Evans' wishes, thus opening the door for the current teammate-versus-teammate title fight and a splintering within the Jackson squad. Only that's not how Jackson remembers it at all.

"The thing with Rashad is, he said he was okay with Jon coming on the team. I felt that Jon did the wrong thing by saying he would fight Rashad. But once they signed to fight, I'm staying out of it. I'm not choosing Rashad over Jon Jones or Jon Jones over Rashad; I'm staying out of the entire thing. Everybody signed on to [Jon] being on the team. It wasn't like I brought him on with these evil intentions. I bring a lot of training partners on to the team who are in the same weight class. For instance, Donald Cerrone, Melvin Guillard, Clay Guida – all these guys are in the same division."

As Jackson explained, it's hard to have quality training without quality sparring partners, so it's inevitable that his fighters will be training alongside their counterparts in the same division of the same organization, particularly now that the UFC has firmly established itself as the one and only major promotion.

But if this situation has showed Jackson anything, it's that perhaps his ideal vision for how his team should operate isn't in line with the realities. With titles and money on the line, the pressure on his fighters to face one another in the cage becomes almost irresistible. Then all it takes is one little comment – such as Jones' remark in a Versus interview that he'd be open to a potential fight with Evans – and the wall that keeps his fighters from facing one another comes crumbling down.

"We have to sit down and find a way to have a team dynamic and yet deal with the situation so that we don't get caught like we just caught with this thing," said Jackson. "We're going to meet with the team and I guess we're going to set protocols up for this sort of thing, because we're living in a monopoly. There's really only one game in town and it's the UFC, period. Anybody who gets powerful enough to even come close to that is going to be absorbed by the UFC, and that's fine. I really enjoy working with the UFC, but that brings its own realities. The reason I don't like fighting each other is we've got to have a cooperative, competitive dynamic. I want to make sure people are still giving each other moves and helping each other out and doing all these things."

What really bothers Jackson is the perception that he abandoned Evans for Jones, or that he's looking to trade in his older fighters for the younger prospects with brighter futures.

"There's a lot of people I've turned away, and that goes to more evidence that Jon was welcome on the team," he said. "Because there have been some incredible fighters – and I'm not going to name names – but incredible fighters who I've had to say no to. If I was all about the bigger, better deal, which some people might think, I would take those guys on. But I didn't because everyone has to be okay with it, and they weren't. I'm very careful about how I do that."

That's why it's so difficult to have Evans lay the blame for the current situation entirely at his door, Jackson said. The more he hears that it was all his fault, the more he wonders what he could have done differently. Jackson hasn't found many answers to that question, so he's chosen to do the only thing that makes sense to him now: stay out of it altogether.

"I'm not sure what it is. Maybe [it's the situation], but Rashad is coming straight at me, [saying] 'Greg Jackson did this and Greg Jackson did that.' I'm the one that's not choosing. I'm staying neutral. I'm not going to tell you you can't fight. You're both grown-ass men. I'm not the boss of either of you, and I'm not your dad."

He's just the coach. Only now, as far as Jones and Evans are concerned, he's not even that. He's an observer. He's intentionally uninvolved, at least in the gym and in the corner.

That's because when two of his friends and protégés step in the cage together at some point in the not-so distant future to do battle over a hunk of metal and leather, there's no way for Jackson to win without also losing. The only thing for him to do is to refuse to play.

For a coach like Jackson, that's its own challenge -- and perhaps its own special brand of torture.