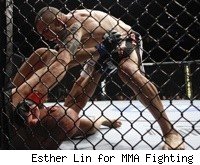 The UFC 128 Prelims show pulled in a below-average audience of 1.3 million viewers, according to ratings released Tuesday by Spike TV.

The previous Prelims card carried by Spike TV, UFC 126, recorded a series-high of 2 million viewers off a 1.2 household rating. Still, ratings for UFC prelims on Spike remain much higher than ION television. The undercard on ION for UFC 125 and 127 averaged 829,000 and 714,000 viewers, respectively.