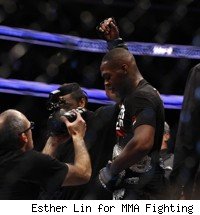 The last time I ranked the Top 10 pound-for-pound fighters in MMA, I heard from a lot of readers who thought it was too early to have Jon Jones on the list.

No one is going to say that now.

I think Jones is doing things we haven't seen before, and dominating his opponents in ways that few fighters can equal, and so I have Jones among the truly elite on my latest list, which is below.

1. Anderson Silva (1): Silva has so thoroughly cleaned out the middleweight division that everyone is talking about putting him in a superfight against the champion of another weight class. If that's what happens, I'd rather see Silva take on Jones than take on Georges St. Pierre. As the best fighter in the sport, Silva should test himself by taking on a bigger opponent, not a smaller opponent.

2. Georges St Pierre (2): The upcoming fight with Jake Shields is a great example of how we've all just come to expect consistent greatness from GSP: Shields is a terrific fighter who's riding a 15-fight winning streak, and yet it's hard to find anyone who really thinks Shields has much of a chance. We can practically hear Bruce Buffer announcing that all three judges scored the fight 50-45 for St. Pierre right now. That's just what's assume of GSP these days.

3. Jon Jones (9): Is it too soon to put Jones up this high? I don't think so. Not after the way he destroyed a legend in Shogun. Not after the way he's dominated everyone he's faced, from Ryan Bader to Vladimir Matyushenko to Brandon Vera and even Matt Hamill in the fight Jones lost by disqualification. Jones isn't just winning, he's winning like Secretariat in the Belmont. No one at 205 pounds is close.

4. Jose Aldo (3): The featherweight division is arguably the UFC's weakest, and that means it's a little tough to gauge Aldo against the champions of the deeper weight classes. But he's been spectacular so far, building up an 18-1 record at age 24, and I expect him to whip Mark Hominick at UFC 129.

5. Dominick Cruz (5): Cruz has a 17-1 record and only a couple of those 17 wins have even been close. So there's no arguing with what he's accomplished in the sport so far. However, the one loss is to Urijah Faber, who will now challenge Cruz for the bantamweight belt. We'll find out in the rematch whether Cruz has improved enough since losing to Faber in 2007 to really be considered one of the sport's elite, or whether Faber will be back on the pound-for-pound list.

6. Frank Edgar (6): It's amazing how much the lightweight division in MMA has changed in the last year. Before Edgar beat B.J. Penn in April of 2010, the lightweight class was viewed as fairly weak, with Penn head and shoulders above the rest. Now it's viewed as a shark tank full of challenges, with a long line of contenders already in the UFC, coming to the UFC from the WEC or (eventually) coming to the UFC from Strikeforce. But one thing that hasn't changed since April is that Edgar is at the head of the class.

7. Gray Maynard (7): First in line for Edgar's belt is Maynard, who fought him to a draw in January and gets a rematch in May. Maynard has a great chance of dethroning Edgar, but if he loses he'll spend the rest of his career kicking himself for failing to finish Edgar in the first round of their classic New Year's Day fight.

8. Cain Velasquez (8): The king of the heavyweights remains out of commission, awaiting a bout with the Brock Lesnar-Junior dos Santos winner, likely in the fall.

9. Joseph Benavidez (10): Having now moved from the WEC to the UFC, Benavidez just keeps winning, taking a unanimous decision over Ian Loveland at UFC 128. Benavidez is 14-2, with the only two losses coming to Cruz, even though he's fighting in a weight class above where he should be. I still maintain that the UFC needs to start a 125-pound flyweight division, and that if that ever happens Benavidez will reign as the division's champion. For now, he's just below championship-caliber, while consistently fighting bigger opponents.

10. Jon Fitch (NR): After a controversial draw with B.J. Penn in February, Fitch will get a chance to finish things in their rematch in July. I thought he deserved to win the first fight, and I think he'll beat Penn more convincingly the second time around and show that even if he can't beat St. Pierre, he's better than anyone else at 170 pounds.