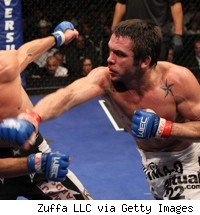 Former WEC lightweight champion Jamie Varner has booked his first fight since being cut by Zuffa following his last fight.

Varner will meet Tyler Combs in the co-main event of XFO 39, a promotion run by former WEC title challenger Jeff Curran, who will fight in the main event against Joe Pearson. The all-pro card will take place May 13 at the Sears Centre Arena in Hoffman Estates, Ill., outside Chicago.

Varner has not won a fight since WEC 38 in January 2009, when he won a split decision against Donald Cerrone. That fight was stopped in the fifth round when Cerrone landed an accidental knee on the ground. When Varner couldn't continue, the fight went to the scorecards and one of MMA's biggest feuds was born.

Varner retained the WEC's lightweight title that night against Cerrone, but thanks to a broken hand in the fight, he was out of action for nearly a year. When he returned, he faced then-interim champion Ben Henderson, who submitted him in the third round with a guillotine to unify the belts. He settled for a draw against Kamal Shalorus at WEC 49 (Shalorus lost a point in that fight for low blows), lost a grudge match to Cerrone at WEC 51 and was submitted by Shane Roller at the final WEC event, WEC 53 on his home turf in Glendale, Ariz., leading to his release.

Combs (13-7-1) was scheduled to face Jorge Gurgel at the Strikeforce: Feijao vs. Henderson event earlier this month in Columbus, but pulled out five days before the fight with an injury. Combs lost to Mike Lullo last fall; Lullo went on to a short-notice UFC debut loss to Edson Barboza. Combs' last two wins have come against Mitch Whitesel (16-20) and Jay Ellis (11-40), who has lost 12 straight fights. He also has TKO losses to UFC lightweights Erik Koch and Bart Palaszewski on his resume.

Curran (32-13-1) has won three of his last four fights since being released by the WEC following four straight losses. Those losses came in a featherweight title fight against then-champ Urijah Faber and decision losses to Mike Brown, Joseph Benavidez and Takeya Mizugaki – all one-time WEC title holders or top challengers.

Since being let go by the WEC, Curran, who has also fought in the UFC and Pride, has a Strikeforce win and a pair of wins on his own XFO show. He lost a Bellator fight in Chicago last April to Bryan Goldsby.

His opponent, Pearson (36-17-1), a veteran of the Midwest MMA scene, has lost three straight. His biggest career win came at Pride Bushido 13 in 2006, a submission win over Yoshiro Maeda. He has notable losses to UFC fighters Miguel Torres, Faber, Koch and Raphael Assuncao.