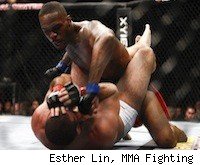 According to oddsmakers and fans, Evans -- a former champion himself -- is an underdog. A very big underdog.

Shortly after Jones and Evans verbally agreed to fight each other, Jones was installed as a 4-to-1 favorite in the bout. Since then, the betting public has only increased that gap, making Jones more than a 5-to-1 favorite.

Evans and Jones initially resisted overtures of a title fight between them, citing their status as teammates in the Greg Jackson camp, but as the Jones-Rua fight neared and Jones was consistently asked about it, his answers seemed to thaw on the possibility, and Evans soon followed.

Immediately following Jones' win, Evans told MMA Fighting in an exclusive, cageside interview that he was "done with Jackson's."

Evans is exploring several options for a training camp in the wake of his departure, including starting his own camp. There is no timetable for the fight, as Jones requested some time off following back-to-back fights over a six-week span, and Evans just resumed training after recovering from the knee injury that knocked him out of the Rua fight and opened the door for Jones' golden opportunity.