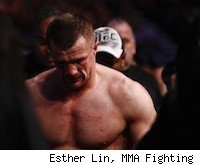 NEWARK, N.J. -- There was cause for celebration in the MMA world with Jon Jones capping off his meteoric rise by winning the UFC light-heavyweight championship, but while one young star tries to write his legend, another storied competitor might have seen his last time in the fighting arena.

Carefully tempering his statement with respect, White said he doesn't expect to get "an argument" from Cro Cop about continuing his career after the Croatian was knocked out by Brendan Schaub in the third round of their UFC 128 fight.


More: Jon Jones Makes UFC History | UFC 128 Results
"It was a good fight," White said. "I was talking tonight about how tough Mirko Cro Cop is. At his age and with the wars he's been in, to see how he gets in there with these heavyweights now that are bigger, stronger and younger than he is, and still holds his own, it's a testament to what a great fighter that guy was in his prime. I have a lot of respect for Mirko Cro Cop, but yeah, I'd have to say tonight is probably the last time we'll see Mirko Cro Cop fight again."

At his prime, Cro Cop (27-9-2, 1 no contest) was the most feared heavyweight striker in the world, a K-1 kickboxer who was famous for his head kick knockouts.

He holds wins over Josh Barnett, Mark Coleman and Wanderlei Silva, among others. But after Cro Cop joined the UFC in 2007, he could never find the same consistency that helped him to a legendary career overseas.

An April 2007 knockout loss at the hands of Gabriel Gonzaga marked the beginning of Cro Cop's struggles, and though he won three times in the UFC since then, he never beat a top contender, losing fights to Cheick Kongo, Junior dos Santos, Frank Mir and now Schaub.

Cro Cop flirted with the idea of retirement in the past, but with two straight knockout losses, White at last seems to think the time is right for the legend to bow out.