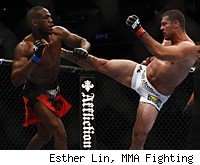 NEWARK, N.J. -- Jon Jones has a specific fight day ritual. He likes to visit a spot with some natural beauty to feel the energy of nature. It's supposed to be a peaceful time, a way to collect his own power and find his focus.

On Saturday afternoon, his peaceful spot turned to chaos. Jones found himself in the middle of a robbery, and along with coaches Greg Jackson and Mike Winkeljohn, helped apprehend a thief.

Jones recounted the story in brilliant style following his star-making UFC 128 championship win over Mauricio "Shogun" Rua, capping off a day that can only be classified as epic.

Jones said he and his coaches were just getting dropped off at a park in the nearby city of Paterson when his co-manager Glenn Robinson warned them that the area was known for its crime. The trio shrugged it off and was no sooner out of the car when they heard screaming. Before Jones even realized what was happening, Jackson and Winkeljohn took off after the perp, who had allegedly smashed a windshield and stolen a GPS unit. Jones, who ironically had the career ambition of becoming a police officer before turning to MMA, quickly followed them.

"I got these gazelle legs, and I'm running, and next thing you know, I catch up to my coaches," he said. "I said, 'What do we do? We going to catch this guy?'"

Jones said it was then he "put the jets on" and sprinted past his coaches.

The thief tripped over his own feet and as he tried to regain his footing, Jones kicked his ankle out, figure-foured his legs and helped hold him until the police came for the easy collar.


Jones said it was then that one of the cops realized who he was.

"The policeman said, 'What? What are you doing here? Aren't you fighting tonight?'" Jones said.

Jones then returned back to the woman who had screamed for help, and she thanked him and told him God would be with him as he fought.

"I just want to say to [New York MMA opponent] Assemblyman Bob Reilly, 'We come to New York, have an economic impact on your city, not just here but in Syracuse, Buffalo and all these other cities, and we fight crime, too,'" he said. "How can you keep us out of here?"