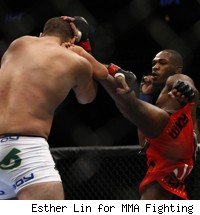 NEWARK, N.J. -- If conventional wisdom is right, and Jon Jones becomes MMA's transcendent figure, the one who brings the sport on a ride to the next level, 20 years from now, you'll be telling your kids about the epic story of the day Jones won the belt.

It's a hard-to-believe tale that might one day be part of a movie that people assume is fiction. But it began with Jones foiling a robbery and ended late in the evening of the night the earth saw its first supermoon in 18 years, with Jones vanquishing the battle-hardened champion Mauricio "Shogun" Rua in a third-round TKO so dominant, it bordered on ridiculous.

Jones controlled the action from the opening touch of gloves until referee Herb Dean pulled him off a downed Rua two minutes, 37 seconds into the third. According to Compustrike, Jones out-landed Rua 87-13, took him down twice, and landed 57 ground strikes to Rua's zero.

At 23 years, 243 days old, Jones is the youngest champion in UFC history.

"With what I saw tonight, it looks like he's a mile ahead of everybody else," UFC president Dana White said.

The road to gold was filled with green lights and short cuts for him, but when he finally encountered a speed bump, Jones sped through it with ease.

His whirlwind ascension to the top of MMA's most competitive division was stunning in speed. He began training in the sport just over three years ago. At the time, Rua -- a Muay Thai striker with a Brazilian jiu-jitsu black belt -- was already considered one of MMA's great light-heavyweights having won a PRIDE Grand Prix.

Jones was promptly installed as more than a 2-to-1 betting favorite, a number which White said at the time seemed "ridiculously insane." But Jones always believed, signing autographs with "Champion 2011" after his name.

At that, Rua's manager Eduardo Alonso said the champ was being disrespected and that "no one has ever walked through" Rua.

Both White and Alonso were shockingly wrong, while Jones couldn't have been more right.

"Champion 2011," Jones said. "It feels so good. It's a testament that dreams can come true, guys. They really can. Believe in yourself, believe in your heart, and once you get there, don't slow down. It comes true, everybody."


The end came in the third after Jones had battered Rua throughout the first two rounds. Rua's face was already marked up. A scramble on the ground ended with Rua looking for a kneebar. Jones pulled free and scored with a ground and pound barrage including a series of his trademark elbows. It was clear Rua was in big trouble but the proud champ found a way back to his feet for one last stand. He was completely gassed by then, and Jones pounded him against the cage until Rua crumpled down to the canvas and referee Herb Dean stopped the action.

The fight over, the belt his, Jones walked to the center of the cage, arms outstretched, and wallowed in the ovation from the crowd.

The reviews from other UFC 128 fighters were just as glowing.

Added Urijah Faber, the only man on the post-fight press conference stage who had worn gold before Saturday night, "He could be a mix of [Michael] Jordan and [Muhammad] Ali."

Jones had come into the fight with explosive momentum, having steamrolled through his last three opponents: Brandon Vera, Vladimir Matyushenko and Ryan Bader. The last of those fights had come just six weeks ago, and coupled with a Rashad Evans injury, paved the way for Jones' title shot.

Rua, meanwhile, was coming off a 315-day layoff following knee surgery needed after injuring his knee during his May 2010 title win over Lyoto Machida.

As if fighting for his first championship wasn't enough, Jones took part in a mid-day Good Samaritan act, helping to catch a robber who had just stolen a women's GPS unit in a Paterson, N.J. park. Jones was with coaches Greg Jackson and Mike Winkeljohn when a screaming couple alerted them of the act. Jackson and Winkeljohn took off after the thief first, but Jones quickly outraced them and knocked the mugger on the ground, then helped to hold him there until police arrived.

As if that wasn't enough, he designated his post-fight after-party as a charity event.

"The only thing left for him to do is deliver a baby on his way out here," White joked. "What else can this guy do?"

Jones, though, already knows what is next for him. Rashad Evans, his onetime teammate at Greg Jackson's, is likely to leave the camp in order to face Jones for the belt. It's too early for a date, as Jones said he owes his family a vacation after his wild stretch, but Evans will have no easy task.

Evans knows that now after watching Rua leave the cage. The battered champ bowed out gracefully before going to the hospital, saying simply, "I have to congratulate him. He was better than me."

He was better than he should have been, better than almost anyone could have expected. There have been others who have been expected to dominate upon winning a title, but fell short. But Saturday night's UFC 128 had the feeling that we were watching the future, the evolution of a sport, or at least a fighter who had evolved past it. We were watching MMA 2.0, and Jon Jones was its leader.