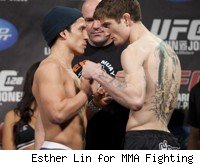 NEWARK, NJ -- This is the UFC 128 live blog for the three non-televised preliminary bouts on tonight's UFC 128 event from the Prudential Center.

The opening bout should begin around 7 p.m. ET.

Round 1: The southpaw Koch takes the center of the cage confidently. They circle for a while, until Koch tags him with a left. Koch scores from the outside with kicks. Very slow start for Assuncao. Out of nowhere, Koch scores a one-shot knockout, a right hook on the button as Assuncao walks into it. No follow-up necessary, he was unconscious as he hit the ground.

Round 1: Catone is the crowd favorite here. Slow action early. Catone eventually closes the distance and puts Philippou against the fence, where he lands a few knees to the body. Philippou lands a hard left hook midway through that knocks Catone backwards. Another one a few seconds later as Catone fires back. Catone fakes a takedown but Philippou makes him pay with a hook. Catone says he was poked in the eye, but the ref didn't see it and action continues. Catone takes him down with 45 seconds to go. Catone lands from the top but Philippou is very active from the bottom as well. Philippou leaves the round with a cut, and Catone takes it 10-9 with the late takedown and ground work.

Round 2: Heavy leather early from the pair. Catone moves in and pushes against the fence to slow the pace. Catone scores with a knee to the face but Philippou shrugs it off and they reset. Catone scores with a left hook, then a left head kick. After a long stretch against the fence, Catone drags him down. Catone in half guard with less than a minute left. He passes to mount with the clock winding down but there's not enough time to finish. Round to Catone, 10-9.

Round 3: Catone drives in with an early takedown, quickly moving to half guard again. Lots of time to work. Catone grinds Philippou down, moving him against the fence. Steady elbows from the position. Philippou isn't as active as he was earlier. Catone dominating the round from the top. Philippou hasn't come close to working free. Caton gets mount briefly, but Philippou works back to half-guard. Should be a dominant 10-9 for Catone, ensuring the win.

Round 1: Loveland comes out with a wild right hook that misses badly. Benavidez with a straight kick to the body. Benavidez ducks low for a takedown, Loveland cracks him with a right. Loveland stuff a takedown try with two minutes left. Back to the center of the cage. Loveland wants to keep this standing. He lets his hands go in flurries but hasn't landed much of substance. Loveland scores with a right behind the ear, then tags Benavidez two more times in a sequence that follows. Loveland landed the more significant shots, so I score it for him 10-9.

Round 3: Benavidez landed a hard right that staggered Loveland. Benavidez followed with a takedown, but Loveland worked back to his feet and drilled Benavidez with a knee to the face. He landed another knee later. Benavidez took him down again. Loveland tried a kimura and used it to get up. Very close round and the fight goes to the judges.