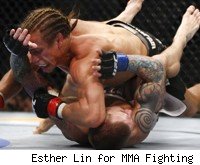 Urijah Faber won his first UFC fight, but it was tougher than expected.

Eddie Wineland, who like Faber is a former champion of World Extreme Cagefighting, gave Faber all he could handle but ultimately lost a unanimous decision to Faber at UFC 128. All three judges scored the fight 29-28, giving the first round to Wineland but the second and third to Faber.

"I felt pretty good," Faber said afterward. "Eddie's really tough. He caught me a little off guard. ... Thanks for the great fight, Eddie."


Wineland got off to a great start, taking the center of the cage, going on the offensive and holding Faber up against the fence. Wineland clinched with Faber for the first half of the first round and wouldn't let Faber do much of anything, and Faber started to look frustrated. Later in the round Faber started to connect with his punches, but overall it was Wineland's round -- a surprisingly effective round for the underdog.

Faber was much better in the second round, securing a takedown, putting Wineland on his back and unleashing some vicious ground and pound, with several hard elbows to Wineland's forehead. Wineland did a nice job of keeping Faber inside his guard, but even from in the closed guard Faber was able to hit Wineland hard, and he also slammed him hard twice. It was a round that Faber won, making it an even fight going into the third.

It was still anyone's fight through a long feeling-out process in the third round, but Faber finally connected with a couple of hard punches that weakened Wineland, then secured a takedown with about a minute to go that allowed him to end the fight on the top, having done enough to win the decision.

Faber improves his record to 25-4, and he's likely to get a shot at bantamweight champion Dominick Cruz next. Wineland falls to 18-7-1.