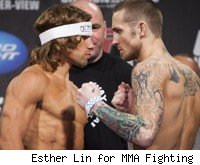 NEWARK, NJ -- This is the UFC 128 live blog for Urijah Faber vs. Eddie Wineland, a bantamweight bout on tonight's UFC 128 pay-per-view from the Prudential Center.

Faber (24-4) is a former WEC featherweight champion and put Takeya Mizugaki to sleep at last November at WEC 52. Wineland (18-6-1) was the first ever WEC bantamweight champion and won his last four WEC fights. Both are making their UFC debuts after successful runs in the WEC.


Round 1: Wineland runs out to meet Faber on his side of the cage. Faber clinches and Wineland pushes him against the fence. Crowd is heavily pro-Faber and they start to chant his name. Wineland lands a hard right uppercut as they break. Faber shoots in but Wineland side-steps him and they're against the fence again. Wineland clasps his hands behind Faber's back, then dumps him to the ground. Faber's back up in a flash and they go back to the center of the cage. Excellent takedown defense from Wineland early, as he stuffs another attempt. Wineland blasts Faber with a right that's the best scoring shot of the round. Faber shakes the cobwebs, lands his own right seconds later. Very close round. Slight edge Wineland, 10-9.

Round 2: Faber comes out aggressively with a punch, left high kick combo. Neither lands. But Faber has the center of the cage now. Faber uses a nice trip takedown to put Wineland on his back 1:30 in. Faber starts landing elbows from the top as he controls the position. Faber stands up in Wineland's guard and scores with right hands. Wineland tries to get back to his feet but Faber smothers him and keeps him on the mat. While the standup is anybody's game, the ground is Faber's world, and he's having no problems controlling his opponent and landing damaging strikes. Big round for Faber, 10-9.

Round 3: The two are slow to engage in the final round. After a Faber right, he tries a takedown. Wineland stops him. Wineland stacks Faber on the fence and throws an elbow that misses. Faber ducks under and escapes into space. Faber faked a takedown and tagged Wineland with a blazing uppercut that fazed him. He followed with a right as they exchanged, Faber getting the better of it. They clinch, Faber goes low and drives for a double leg takedown. About one minute left. This should seal it for him. Faber finished strong with elbows and right hands from the top. Faber, 10-9.