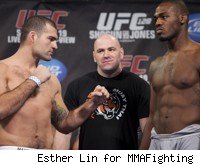 NEWARK, NJ -- This is the UFC 128 live blog for Mauricio "Shogun" Rua vs. Jon Jones, the main event of tonight's UFC 128 pay-per-view from the Prudential Center.

After knocking out Lyoto Machida for the light heavyweight belt at UFC 113 last May, Rua (19-4) returns to action to make his first title defense. Jones (12-1), who is stepping in for teammate Rashad Evans, was offered the title fight last month after his win over Ryan Bader at UFC 126.


A mostly pro-Rua crowd waits patiently for a break between fights. A hype video plays on the replay screens, and the fighters will be out soon. Jones walks out to "Empire State of Mind." He looks preternaturally calm. Takes a deep exhale before he walks in, then to his knees to say a prayer. He does a one-hand cartwheel into the cage. Now it's Rua's turn. He walks in to some dance music, throwing his fist in the air as he enters the cage. It's time. The two shake hands after getting ref's instructions.

Round 1: Jumping knee from Jones to open, then leg kicks. Rua swings with a right. Jones takes Rua down 30 seconds in. Crowd pops. Jones into Rua's guard. Rua throws his legs up for a triangle or arm bar, but Jones is out. Rua looking for a leg from the bottom. Jones prepared. Jones lands a left elbow, then another. But Shogun is busy enough from the bottom that Jones isn't peppering him. Jones lands a left hand as we reach midway. Rua back to full guard now. Jones with elbows to the body. Rua looking to set up a triangle. Jones with strikes from the top. Shogun tries to get up. Jones knees him to the body, then knees him to the head. Shogun is hurt. Jones is careful. Knees from the clinch for Jones. Jones with a right from outside. Rua with a right hand over the top. Rua takes Jones back, tries to take him down. Jones steps right out and ends on top with :20 left. Big round for Jones, 10-9.

Round 2: Jones looks the fresher of the two to start round two. Jones with a front kick. Rua throws a wild left. Jones clinches and holds him against the fence. Spinning back elbow lands for Jones. It's all Jones early. Jones looks very relaxed, switching stance. They clinch again. They break with nothing landed. Rua tries a two-punch combo, but it starts from across the cage and Jones sidesteps. Another front kick. Then leg kicks. Rua throws a leg kick, Jones catches it and takes him down with ease. Jones has a little trouble from the top as Shogun defends well, tying him up. Rua loves that half-guard from the bottom, but Jones is having no trouble stopping his favorite attacks because of his length and base. The grueling bottom position is no picnic for Rua. Jones position for a kneebar to close but the round runs out. 10-9 Jones.

Round 3: Rua's face is marked up a little. Rua tries to wade in with a barrage, Jones sidesteps him. Jones tries a head kick, Rua ducks under, takes his back. They scramble to the ground. Rua looks for a kneebar, Jones is out. Jones on top now. Jones with hard ground and pound, a series of strikes. Rua had his gloves up to protect, but some got through. Big left hand from Jones, then a right elbow. Left elbow. Rua ini big trouble. Rua in big trouble. He's back to his feet. Jones hammers away. Rua goes down. It's over. MMA 2.0 is here.

Rua: "I wanted to fight Jones wherever the fight could go. I have to congratulate him. He was better than me."