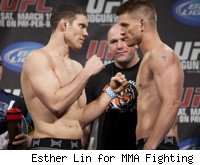 NEWARK, NJ -- This is the UFC 128 live blog for Ricardo Almeida vs. Mike Pyle, a welterweight bout on the Facebook portion of tonight's UFC 128 event from the Prudential Center.


Pyle walks in to the song "Remember the Name" by Fort Minor. Almeida enters to "Ball and Chain" by Social Distortion.

Round 1: Almeida, who is looking very comfortable on his feet, lands a leg kick. Pyle throws a leg kick 30 seconds in and Almeida immediately responds with one of his own. Pyle, stalking from the center of the cage, lands a kick to Almeida's lead leg. Almeida shoots out a straight right and Pyle counters with an uppercut. Almeida shoots at 3:04 and Pyle slams him down. Pyle walks away to avoid indulging in Almeida's strength on the floor. Almeida shoots again and is stuffed. Almeida shoots and takes down Pyle but Pyle bounces back up. Almeida lands a right hand. Almeida reaches for the takedown again and they battle in clinch. Pyle lands a knee as Almeida goes for another takedown. Tough round to score. 10-9 Almeida.

Round 2: Pyle stalks as Almeida circles near the cage. Almeida scores the takedown, briefly. With the help of the cage, Pyle stands back up into clinch. Nice defense. They trade short knees to the thigh in clinch. Almeida bends down for the takedown. Almeida tries for a single-leg and Pyle slips away. Pyle scores with punches to the body. Almeida misses on a takedown attempt. Pand lands a hard leg kick. Almeida finally secures the takedown with 48 seconds left. Pyle attempts the kimura in closed guard. Meanwhile, Almeida throws left punches to Pyle's body. The final takedown probably won him the second. 10-9 Almeida.

Round 3: Pyle throws out kicks and lands the ones to the leg. Pyle throws a punch combo and Almeida ducks under. Pyle is the more aggressive striker here. Almeida continues to look for the takedown. Pyle defends a takedown and shoves Almeida down. Pyle entertains entering Almeida's guard and Almeida takes advantage by grabbing a single-leg. Almeida gives up on the takedown to throw a left elbow. Pyle answers with a knee. Almeida lowers again for the takedown with a minute remaining. Pyle wraps his right arm around for the guillotine and then tries for a flying knee. Pyle has been scoring with the knee in this fight. Almeida takes Pyle to the floor but Pyle immediately jumps back to his feet. Pyle tries for a trip takedown. The bell sounds and the crowd boos. 10-9 Pyle and the fight 29-28 for Almeida on my unofficial scorecard.

Both Facebook prelims came down to how the judges scored the close first rounds.
http://xml.channel.aol.com/xmlpublisher/fetch.v2.xml?option=expand_relative_urls&dataUrlNodes=uiConfig,feedConfig,localizationConfig,entry&id=992223&pid=992222&uts=1300603008
http://www.aolcdn.com/ke/media_gallery/v1/ke_media_gallery_wrapper.swf
UFC 128 Fight Night Photos
Jon Jones kicks Shogun Rua in the face at UFC 128 on Saturday, March 19, 2011 at the Prudential Center in Newark, N.J.
Esther Lin for MMA Fighting
Esther Lin for MMA Fighting