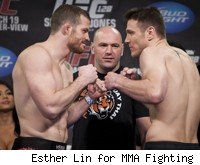 NEWARK, NJ -- This is the UFC 128 live blog for Nate Marquardt vs. Dan Miller, a middleweight bout on tonight's UFC 128 pay-per-view from the Prudential Center.

Marquardt (30-10-2) is coming off a title eliminator loss to Yushin Okami at UFC 122 in November. Miller (13-4) is moving up to the main card to replace Yoshihiro Akiyama, who withdrew from the fight due to the recent crisis in Japan.


Round 1: Marquardt throws out a couple early jabs, then wades in with a right. Miller ducks and goes for a single leg. They stalemate as Marquardt stops him. Miller holds on to the leg, drives him halfway across the cage but can't put him on his back. Finally, he does, against the cage. Marquardt's back is to the cage until Miller pulls him away. Marquardt reverses, Miller sinks in a guillotine that looks close, but Marquardt stays composed and escapes. Marquardt on top now. Miller stifles his groundwork and they are stood up after an extended period. One minute left. Marquardt ducks low and scoops Miller up for a slam takedown. Miller hunts a kimura but Marquardt defends as the round runs out. Tight round, 10-9 Marquardt.

Round 2: A Marquart left hook lands, then a head kick as he tries to take control from the outset of the round. Marquardt's offense landing now as he seem to have found his rhythm. Miller catches Marquardt's flying knee and puts him on the mat momentarily. Back to their feet, and Marquardt finds a home for a straight right. A mouse is forming next to Miller's left eye. Another right hand and Marquardt then takes Miller down. Miller snatches a guillotine with a minute left. Miller squeezes for all he's worth but Marquardt pulls his head free. Another round for Marquardt in the books, 10-9.

Round 3: Miller has blood leaking from around his left eye as Marquardt continues to find a home for his right. Miller shoots for a takedown. Marquardt sprawls. Three minutes left. After a scramble, Marquardt ends up on top. Marquardt with solid elbows as time ticks away. Left hands from Marquardt as Miller is stuck against the cage. Miller throws his legs up for a triangle but he has no space and Marquardt easily pulls free. Marquardt takes the round 10-9 and likely the fight.