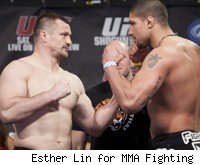 NEWARK, NJ -- This is the UFC 128 live blog for Mirko Cro Cop vs. Brendan Schaub, a heavyweight bout on tonight's UFC 128 pay-per-view from the Prudential Center.


Big fight for both men, Schaub trying to make his way up the ladder, Cro Cop trying to stay relevant. No "Wild Boys" for Cro Cop tonight.

Round 1: Schaub opens with a right high kick that whizzes by Cro Cop's head. Schaub lands a couple of punches from close quarters. Cro Cop starting slow. Schaub pushes him against the fence. Fans start a "Let's go Cro Cop" chant. Ref Herb Dean breaks them up and warns Schaub about hitting to the back of the head. Schaub ducks under a left and takes Cro Cop down. Schaub stands up, then tries a leaping punch into Cro Cop's guard. It misses. Schaub with overhand strikes from the top that land clean, scoring big. Cro Cop scrambles and gets back to his feet. Schaub tries another takedown. This time Cro Cop stays on his feet. They work against the fence until the horn. Schaub 10-9.

Round 2: Schaub with another takedown, early in the round. Schaub was getting back up and Cro Cop upkicked him. Ref Herb Dean called timeout thinking Schaub was still a downed fighter at the time. They continued on. They clinched, trading spots against the fence. Schaub landed a knee but Cro Cop shook it off. Cro Cop's face got bloodied from an elbow, but it doesn't look too bad. They separated with one minute left, and Dean docked Schaub a point for hitting to the back of the head. Cro Cop landed a sharp elbow before the horn. The point deduction makes it a 9-9 round.

Round 3: Low blow to start the round, causing a timeout. Cro Cop looks for the head kick but stops before pulling the trigger, then rushes in with a combo. A left connects. Schaub drives low for a takedown moments later. Cro Cop can't get any momentum. Cro Cop quickly back to his feet but Schaub puts him down again. Very impressive considering Schaub has no wrestling background and Cro Cop usually has excellent takedown defense. He's not able to do much with the position though, and Cro Cop gets back up midway through the round. Still a decent pace for the heavyweights, but lots of clinchwork. Cro Cop looks for a guillotine but Schaub pulls free. Moments later, Schaub plants a right on Cro Cop, who goes down in a heap. Schaub lands an extra one on the ground but it was over already.