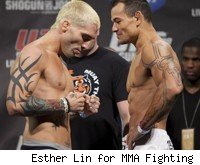 NEWARK, NJ -- This is the UFC 128 live blog for Kurt Pellegrino vs. Gleison Tibau, a lightweight bout on the Facebook portion of tonight's UFC 128 event from the Prudential Center.

Round 2: They continue to cautiously box. Pellegrino throws the first kick of the fight at the 3:18 mark. Pellegrino lands a right hand that dazes Tibau, forcing him off balance. Pellegrino looks to finish and takes Tibau down hard. Pellegrino sits inside Tibau's halfguard and scores points with punches and short elbows. Tibau skips his hips to escape but Pellegrino holds on to stay in the top position. Tibau finally gets closed guard with one minute and 15 seconds left in the round. Tibau finds a way back to his feet with 40 seconds left. 10-9 Pellegrino.

Round 3: Tibau comes out the third round more aggressively. Tibau reaches for a double leg and Pellegrino defends. Pellegrino is fighting very cautiously as he has been doing the past two rounds. Tibau lands a left hand. Tibau shoots and pushes Pellegrino against the cage. Pellegrino pushes off. Pellegrino shoots and Tibau stuffs it. Tibau scores the takedown with under a minute to go and quickly hops over into side control. Pellegrino stands and Tibau is unable to keep him down. Pellegrino lowers for a single-leg with TIbau's back against the fence. Tibau eventually escapes and they box with a minute left. Tibau connects with a straight left. TIbau scores another takedown and ends up in Pellegrino's guard. Tibau lands left hands as Pellegrino scrambles to escape. Tibau has Pellegrino's back standing and Pellegrino rolls for a kneebar. The bell sounds. 10-9 Tibau.

I score the fight a draw. Pellegrino definitely won the second and TIbau definitely one the third. It's up to how the judges viewed the first round.