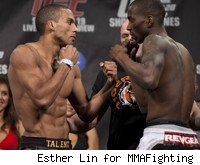 NEWARK, NJ -- This is the UFC 128 live blog for Edson Barboza vs. Anthony Njokuani, a lightweight bout on the Spike TV portion of tonight's UFC 128 event from the Prudential Center.


This should be a fun fight. Two powerful strikers who want to keep it standing.

Round 1: Njokuani shoots out the jab early. Barboza lands a kick to the body, then staggers Njokuani with a right hand. Njokuani back to his feet. Barboza drills him with a right and Njokuani is staggered again. Barboza follows with a kick that just misses. Njokuani gathers himself and resets. Sharp leg kick from Barboza as Njokuani stays on the outside. Njokuani lands a body shot, head punch combo. Barboza answers with a body kick. Njokuani tried to call timeout saying he got poked in the eye. Barboza backed off, but the ref told them to continue. Njokuani's jab starts finding a home late in the round and he adds a hard right late but Barboza's early power takes the round 10-9.

Round 2: Njokuani opens with a leg kick and head kick that misses its mark. A low blow follows, Barboza only needs a second and they continue. A Barboza leg kick catches his opponent off-balance. Njokuani with a straight right that scores. Beautiful spinning back kick from Barboza. Njokuani took Barboza down after a trip and landed a few shots but Barboza was back to his feet quickly. Spinning back elbow from Njokuani knocked Barboza backwards. Both men are dipping into their bag of tricks. Barboza tried a spinning back kick that went wide. Then he went low and took Njokuani for a ride on a slam takedown. About 20 seconds left. Close round, I score it for Njokuani 10-9.

Round 3: A touch of gloves and we're underway. Njokuani coming forward with a straight kick, then a right hand. Very quiet crowd considering the action this fight has featured. Barboza lands both ends of a combo. Two minutes in, anyone's fight. Barboza knocked Njokuani backwards with a straight right, then again with a second. Njokuani answered. Barboza with a series of body kicks have Njokuani circling against the cage. One minute left. Barboza took Njokuani down with 30 seconds left, that might seal it for him. Barboza hit a reverse spinning back kick at the final horn that had Njokuani wobbling. That's how you finish a round and make a final impression on the judges. Round to Barboza, 10-9.