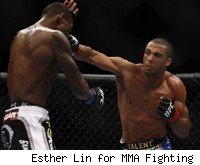 aEdson Barboza capped a close victory over Anthony Njokuani with a highlight-reel kick in the final seconds of a good battle Saturday at UFC 128.

Barboza's spinning back kick connected to Njokuani's face with only a couple of seconds to go in the third and final round, and that highlight-reel kick may have been just enough to give the round and the fight to Barboza, who won 29-28 on all three judges' cards.


Barboza wobbled Njokuani with right hands twice in the first minute of the fight, and he also hurt Njokuani with kicks. In the early going it appeared that Barboza would completely outclass Njokuani, although Njokuani began to look more comfortable as the round continued, and he started connecting with strikes late in the round.

Njokuani picked up right where he left off at the start of the second round, peppering Barboza with kick-punch combinations. When Barboza left a kick open too long, Njokuani also caught it and took Barboza down. After they got back to their feet Njokuani continued to get the better of Barboza on the feet, and although Barboza took Njokuani down at the end of the second, it was definitely Njokuani's round.

Barboza started getting more creative with his kicks in the third round, landing a couple of turning side kicks, but Njokuani was more effective with his straightforward striking, landing front kicks, knees and punches. Barboza took Njokuani down in the final 30 seconds of the third round but didn't do anything, and Njokuani got back up, only to get drilled with that huge spinning kick to the face in the final seconds of the fight, a fitting end to a good fight.