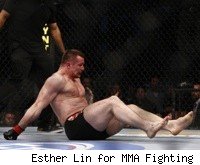 Late in the third round, with the fight looking close to going the distance, Schaub hit Cro Cop with a huge right hand that sent Cro Cop head-first into the canvas. Cro Cop was already out, but Schaub pounced and landed another hard punch before referee Herb Dean stopped it.

Schaub, who improved his record to 8-1, hugged the legendary Cro Cop afterward and said, "You're the reason I got started, Mirko."


Schaub circled away from Cro Cop's left high kick and went to the inside early on, landing an uppercut that hurt Cro Cop in the early going. When they clinched against the cage Schaub controlled Cro Cop and hurt him with punches, and after a couple of minutes Schaub, a former college football player, used a football-style tackle to put Cro Cop flat on his back. From the top position on the ground Schaub hurt Cro Cop with punches to the face, but Cro Cop was able to sweep and get back to his feet with a minute to go in the first round. It was a round Schaub clearly won, but Cro Cop had to at least feel good that he withstood the best Schaub had to offer.

Early in the second round Cro Cop unleashed his classic left head kick, but it didn't really do anything and Schaub easily took Cro Cop down afterward. When they went back to their feet Schaub was getting the better of most of the exchanges, but Cro Cop did hit Schaub very hard with a short elbow and bloody his nose. Schaub had a point deducted for hitting Cro Cop in the back of the head after being warned not to, and because of that I scored the second round a draw, 9-9.

in the first minute of the third round Schaub got two more football-style takedowns, and it looked like it was a fight that Schaub would win by decision. But then came that sudden knockout punch, which gave Schaub the biggest highlight of his young career -- and could have been the last moment of Cro Cop's career.